Yesterday I participated in my second Christmas Bird Count of the season, the Stratford-Milford count. I joined Frank Mantlik for his section of Stratford along with Tina Green, surveying from the Washington Bridge connecting the two towns down the Housatonic all the way to Stratford Point and across to the edge of Long Beach. This count took place on the same day as last year, Boxing Day, though it did not feature a crippling blizzard halfway through the day. It was a chilly start, though quite seasonable on the whole, even with the very powerful winds we felt on the Stratford coast in the mid-morning through the afternoon.

There were many special targets we had in mind for this count. A Snowy Owl had been seen in Stratford the day before. Razorbills had been seen on an almost daily basis for a few weeks now in Long Island Sound, and I had spotted them from our own managed Stratford Point on several occasions, including already in the count week. A Little Blue Heron had been seen infrequently, mostly near the Birdseye boat ramp. However, we went in knowing that many irruptive species might be tough to get this year, including Pine Siskin, Common Redpoll, and Rough-legged Hawk to name a few. Additionally, the constant warmth of the fall season meant that more of the birds could remain inland, from ducks on open ponds to sparrows in fields without any snow cover on them.

With the sizable exception of that Snowy Owl, our targets were reacquired along with some more great finds. After successful stops at the DeLuca field area and Frash Pond, Stratford Point was a haven in the early morning with some fantastic birds one does not see too frequently. While we scoped Long Island Sound I picked up a Northern Gannet to our west. Not long after, Tina found those Razorbills once again, with two flying towards us from the east before landing in a group of American Black Duck and Gadwall. They disappeared underwater rather quickly before I spotted another fly in to the same area. It seemed as if things went quickly- another Gannet, Surf Scoter after many White-winged Scoter, and every duck species you can reasonably expect. A Snow Bunting flew in, a lone bird I had seen on Christmas day as well, only slightly bested by the lone American Pipit on the revetment wall. Frank and Tina picked out a Merlin along with two Northern Harriers hunting in the distance.

The full account of the long and busy day would be an exhaustive read, so I will keep the rest of this summary to some of our better finds. Tina first spotted the only warbler of this count, unlike last weekend's extravaganza, but it was a good one and a different species for the month for me - a Palm Warbler! 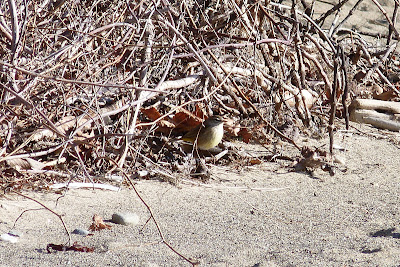 It was along Russian Beach, just to the west of Stratford Point, and very camera shy in such an open area. Continued looks at Long Island Sound did not yield much more than we had at the Stratford Point, and a stop at the marina was largely uneventful until suddenly this Greater Yellowlegs appeared in front of us. 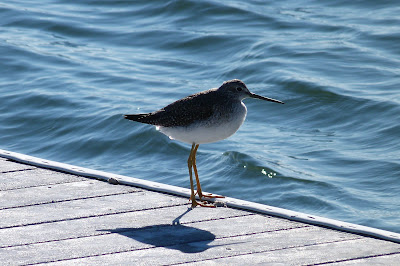 It was like magic, not there one moment and then mere feet beyond the three of us on the dock. We have no idea what happened. When searching for the Little Blue Heron in another stop at the boat ramp I had one of those classic birding moments when you find something you aren't looking for because you're so focused on the target in mind. I nearly walked into - literally - three Wilson's Snipe sitting on the side of the parking lot. They flushed and startled me, moving further onto the floating debris that builds up here. I was able to snap some shots of one that stayed in the open. 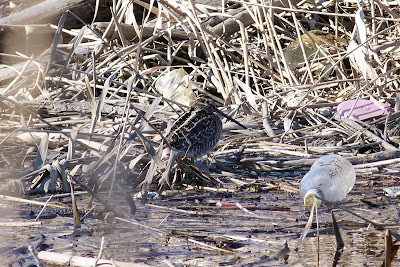 That Snowy Owl may not have been flying around the Great Meadows Marsh on Monday, but an American Bittern was. Short Beach Park, directly on the east side of Stratford Point, continued the run of presents that this connected shoreline area had already given us. We were treated to a Fox Sparrow that popped up from a bunch of White-throated and Song Sparrows behind the tennis courts and on the edge of the landfill. A Great Egret was tucked away there as well as a single Horned Lark with several Savannah Sparrow on the dunes. We often speak of how important Milford Point and Stratford Point are, but Short Beach Park and Russian Beach are also enormously significant to birds, plant life, and other wildlife. On a non-bird note, I was amazed at how much Prickly Pear Cactus, a state-listed species, was now growing at Russian Beach.

We tallied an astonishing 81 species on the day, finding several of the highlights of the entire circle in the process. The overall total was 102, lower than usual with some silly misses, likely due in part to the warmth. No Chipping or Field Sparrows, Brown Thrasher, Hermit Thrush, and American Kestrel may be because they are still in open inland areas. No Bald Eagle or Wood Duck was probably aided by the abundant unfrozen water here and to our north. At this time of year I could very easily have a Common Grackle or Brown-headed Cowbird at my feeders, but neither were seen as they have been able to feed freely away from our counting eyes.

We have a lot to work on in the next few days to get some of those birds for count week! The weather will not be helping to bring birds south as this warmth looks like it may go on through much of January.