Piping Plovers are back at Milford Point

Not only are they back, but males are already setting up territories.

Read more about it on the Audubon Alliance for Coastal Waterbirds blog:
http://ctwaterbirds.blogspot.com/2014/04/territories-already-occurring-at.html 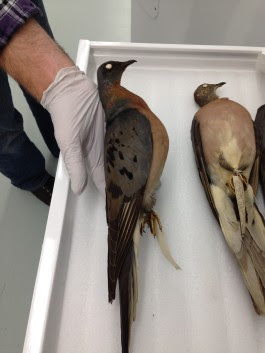 Where to find it: Passenger Pigeons have been extinct for exactly 100 years but on March 12 Connecticut Audubon Society and the Yale School of Forestry and Environmental Studies are presenting a talk by Joel Greenberg, author of the new book A Feathered River Across the Sky: The Passenger Pigeon’s Flight to Extinction, at Kroon Hall.

The talk is free and open to the public. One or two preserved Passenger Pigeon specimens from the collection of the Yale Peabody Museum will be on display, to give you a chance to see what they looked like.

How to find it: Kroon Hall is at 195 Prospect St., New Haven. The talk starts at 7 p.m. and will be held in the Burke Auditorium, on the third floor. Parking is available on the street. RSVP to tandersen@ctaudubon.org.
Posted by Tom Andersen at 12:26 PM No comments: 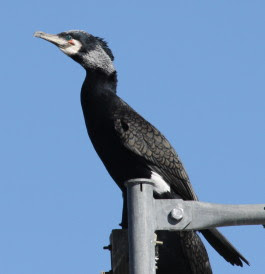 The Great Cormorant is the largest North American cormorant and is found on nearly all continents. In the States, it is restricted to the east coast, where it breeds on a just a few rocky island colonies in Maine. It is a regular winter visitor to Connecticut where it replaces the more commonly found summer resident, the Double-crested Cormorant.

Photo by Mindy Hill.
Posted by Tom Andersen at 8:33 PM No comments: 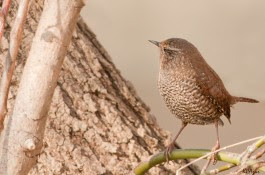 Winter Wren
Troglodytes hiemalis
By Andy Rzeznikiewicz, the land manager at our Pomfret and Trail Wood Preserves.
Where to find it: Winter Wrens can be found throughout the state at this time of year although they are usually hard to find because of their secretive habits. The best place to look is in thick brush near streams. In breeding season, their song is quite loud and distinctive but sometimes in winter one will sing a little bit to make its presence known.

To read the rest of this post, click here...
Connecticut Audubon Bird Finder is edited by Tom Andersen.
Photo by Kelly Azar, Carolinabirds.org.

To receive future Connecticut Bird Finders by email, send your name and town to tandersen@ctaudubon.org.
Posted by Tom Andersen at 9:45 PM No comments:

On the 100th Anniversary of the Extinction of the Passenger Pigeon, Author Joel Greenberg to Talk at Yale 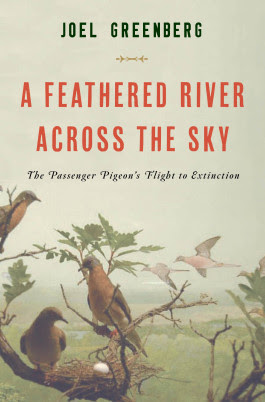 The March 12 Presentation Will Be Based on His New, Acclaimed Book, A Feathered River Across the Sky

Nowhere was nature’s abundance more evident in 19th century America than in the incredible number of Passenger Pigeons. Flocks were so huge that they clouded the sun and took days to pass over villages. These birds fed the colonists and the nation’s westward expansion. They were critical to health of the eastern forests. One such flock, in 1860, encompassed an estimated 1 billion pigeons.

But by 1914, the Passenger Pigeon was gone, driven into extinction.

Introducing the author, and marking the 100th anniversary of the Passenger Pigeon’s demise, Connecticut Audubon Society and the Yale School of Forestry and Environmental Studies will present Joel Greenberg, author of the acclaimed new book A Feathered River Across the Sky: The Passenger Pigeon’s Flight to Extinction, on Wednesday, March 12, at Kroon Hall in New Haven.

The talk starts at 7 p.m. and is free and open to the public. Kroon Hall is located at 195 Prospect Street, New Haven.

Greenberg, the author of three previous books, is a research associate of the Chicago Academy of Sciences Peggy Notebaert Nature Museum and the Field Museum. His presentation, including a selection of photos and illustrations, will compare the extinction of the Passenger Pigeon to the extensive effort being made to save two contemporary birds – Whooping Cranes and Kirtland’s Warblers – from extinction.

In addition, the Peabody Museum will display the preserved skins of Passenger Pigeons in its collection. The March 12 talk will be Greenberg’s only appearance in Connecticut.

A Feathered River Across the Sky has been extensively praised by reviewers. The New Yorker called the book “equal parts natural history, elegy, and environmental outcry… A painstaking researcher, Greenberg writes with a naturalist's curiosity about the birds… Answering even basic questions about the passenger pigeon requires a sort of forensic ornithology, which gives Feathered River Across the Sky an unexpected poignancy at the very points where it is most nature-nerdy.”

The Wall Street Journal said, “Joel Greenberg has done prodigious research into the literature of the passenger pigeon and lays much of it out in this book. For that effort, all who care about the living world owe him a debt of gratitude.”

The fate of the Passenger Pigeon holds important lessons for conservationists today.
Alexander Brash, president of Connecticut Audubon Society, notes: “In the 21st century, as natural habitats are destroyed and bird populations decline, the story of the Passenger Pigeon is a stark reminder of what can happen even to the species that we take most for granted. Joel Greenberg’s dispatch about the passenger pigeon is a stark reminder about the importance of conservation today. Extinction disrupts ecosystems, permanently removes genetic opportunity from the world, and dramatically marks human impacts on planet earth, our only home.”

Copies of A Feathered River Across the Sky will be available for sale and to be signed by the author at the conclusion of the presentation.

Although the talk is free, space is limited. Please RSVP to tandersen@ctaudubon.org.
Posted by Tom Andersen at 4:48 PM No comments:

Whats out and about at Stratford Point

During weekly waterfowl surveys I usually always have my camera with me to capture some of the other species in the area.


And of course our amazing friends the Snowy Owls are still being seen from time to time.

Posted by Unknown at 2:06 PM No comments: 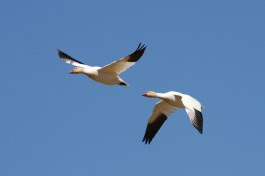 Where to find it: Snow Goose occurs each winter in Connecticut but only in limited numbers, unlike the massive flocks found on the Delmarva Peninsula and the rice fields of Arkansas. Read the rest of this post here...

Photo by Cephas.
Posted by Tom Andersen at 8:10 PM No comments: