Who doesn't want to get outside after a long, cold, snowy, winter? The Connecticut Audubon Society has numerous programs nearly every day of the year, and the spring season offers some tremendously enjoyable and educational activities for all ages and experience levels. Our calendar can always be found on the Connecticut Audubon Society website at the following address:

Some of the activities include: 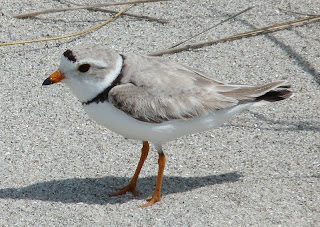 Yes, the state of Connecticut has been inundated with rainfall from a few powerful low-pressure systems this March, but I doubt many forecasters believed March 2010 could end up breaking all-time rainfall records. With more rain yet to come, Bridgeport has set a new record of 9.92 inches as of 6PM today, surpassing the 1953 total of 9.40 inches. Other parts of the state may approach or break their records as well.

So why are we talking about weather? It is an often-overlooked variable in conservation and birding. One month or season of abnormal weather patterns can drastically affect bird populations. The crushing snowfall totals this year in the Mid-Atlantic States are an excellent example. Many species of birds, such as Carolina Wrens, will have noticeable population drops. If one were conducting a Breeding Bird Survey this summer without any knowledge of the previous winter, they would perhaps wonder why some species counts had dropped dramatically, especially if the summer was typical of the local climate. A cold and wet breeding season, with example being the summer of 2009, can lower breeding attempts and success rates. 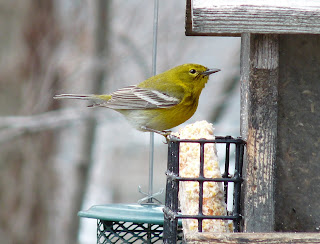 Weather has an enormous affect on every day birding. Of course, one is going have trouble finding passerines sometimes in driving rain or extremely windy days, but weather's role goes further than that. Cold fronts usher in massive raptor flights south every fall. Nor'easters can bring rare birds from southern regions to our doorstep. Frozen bodies of water can alter the movement of ducks during the winter, driving them further south or to Long Island Sound as ponds and lakes from northern regions are rendered useless blocks of ice.

It remains to be seen what the wettest March ever in most of Connecticut will do. It is likely that, combined with a period of record-setting warmth in March and another coming up for the first week of April, plant and tree growth will be accelerated this year. Early migrants like the Pine Warbler shown above may find plentiful plant material and numerous insects to feed on. If southerly winds can dominate the upcoming period we will see a strong surge of migrants, perhaps on an earlier schedule than average, all possibly commencing breeding activities sooner than usual as well. We will frequently explore and analyze weather and climate in terms of conservation and birding on this blog in hopes that we can all learn something more about the lives of birds.

Posted by Scott Kruitbosch at 7:50 PM No comments:

Connecticut State of the Birds 2010

On March 11, 2010, the Connecticut Audubon Society issued its Connecticut State of the Birds Report for 2010. It focuses on important contributions to conservation made by citizen scientists who devote their time and energy to aid professionals in understanding the needs of the natural world. It also highlights the need for the state of Connecticut to change its land acquisition strategies in order to better serve the cause of conservation. There is much more to State of the Birds 2010 that cannot be explained adequately in such a space - take a look:

Click here to read the full Connecticut State of the Birds Report for 2010.

State Senator Edward Meyer (D-12th district), co-chair of the Environmental Committee, incorporated parts of Audubon's recommendations into Bill No. 5417 which concerned open space. These were:

The bill has cleared the Environmental Committee and now awaits review by the Planning and Zoning Committee. If approved the bill will meet the Appropriations Committee for consideration. We will keep you updated on progress of this significant and vital bill. Thank you Senator Meyer, the Environmental Committee, everyone who contributed to this fantastic report, and last but certainly not least, to all of the wonderful citizen scientists in Connecticut.
Posted by Scott Kruitbosch at 8:27 PM No comments: