Alexander R. Brash, a longtime conservation leader and Connecticut resident with an extensive record of success managing non-profits and government agencies, has been named president of Connecticut Audubon Society.

A skillful birder who is as comfortable scoping seabirds as he is in a meeting room, Brash will take on the task of continuing and expanding Connecticut Audubon Society’s many recent successes, including the delivery of first-rate educational programs, conservation-focused advocacy campaigns, and the sustainable management of its preserves.

Brash will start as president of Connecticut Audubon Society on September 9, taking over for Robert Martinez, who retired in late August after a decade as president of the organization. 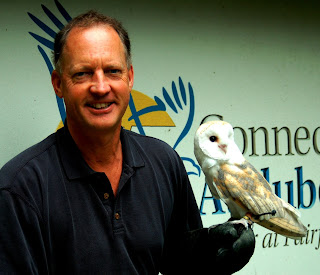 Brash comes to CAS from his previous position as senior director for the northeast region of the National Parks Conservation Association, a non-profit that works to protect and support America’s national parks, where he had been since 2004. During his tenure there, he opened the Northeast Regional office, built a strong and diverse team, developed an impressive array of programs, and helped raise more than $40 million for the organization.

Previously he held positions with the New York City Department of Park and Recreation, including as its chief ranger and head of its Natural Resources Group.

A resident of Connecticut for much of his life, Brash has lived in nearly each corner of the state, and now resides in Riverside.

There's much more information about Alex and about Connecticut Audubon Society's goals on our website, here.
Posted by Tom Andersen at 10:25 AM No comments:

Last week I had the opportunity to spend time in the field with renowned naturalist Geoffrey Hammerson, author of the acclaimed book Connecticut Wildlife - Biodiversity, Natural History, and Conservation (Hammerson, 2004).  Our time was spent searching for anything scaly, slimy, shelled, slithery, squirmy, or a combination thereof, as long as it was of the taxonomic Subphylum Vertebrata – animals with backbones.  And yes, you guessed it, to be more accurate, our query were amphibians and reptiles (Orders Amphibia and Reptilia (often referred together as “Herpetofauna”).  Last week’s weather made for pleasant field work, and we spent one afternoon and four mornings visiting sites in central Connecticut looking for these wonderful creatures.

Our time in the field took us to a variety of habitats and within various preserves and conservation lands. Among the Amphibia, we had no trouble finding Green, Wood, Pickerel, or Bull Frogs in the wetlands, and American Toad in the uplands.  Northern Dusky Salamanders and Two-lined Salamanders were often found in some of the woodland streams we searched, and Red-backed Salamanders were encountered under fallen logs on the forest floor. Sweeps of seasonal pools using a D-net within forested areas often netted us Eastern Red-spotted Newts, Green and Bullfrog Tadpoles, and larval Spotted Salamanders.

Among the Reptilia, Painted Turtles were the easiest to spot, as they were often on display basking in the late morning sun at many of the ponds we visited. At one particular pond, Geoff waded into waist deep water, bent down with both hands under the water surface, and stood up holding a full grown adult male Snapping Turtle!


Snakes were harder to find, and even harder to capture, suggesting that most don’t want to be noticed, and once they are, they beat a hasty retreat. This proved true for the snakes we encountered in our travels such as Ring-necked, Garter, and especially the sometimes grumpy Northern Watersnake.

But the highlight of my week in the field with Geoff was when he found a Northern Copperhead (Agkistrodon contortrix) – one of Connecticut’s only two venomous serpent vipers (Family Viperidae)! Geoff found the copperhead basking on a rock pile within a utility corridor with herbaceous vegetation. (The Eastern Timber Rattlesnake is the other venomous viper that can be found in Connecticut.)

Northern Copperheads are not a species listed in Connecticut’s Endangered Species Act (CTDEP 2010), but nevertheless, they are recognized as a species of Greatest Conservation Need in Connecticut’s Comprehensive Wildlife Conservation Strategy (CTDEP, 2005), and they have been reportedly declining in the state for some time (Klemens, 1993). Despite their ability to use their hypodermic needle-like fangs to administer a lethal dose of venom to their preferred rodent prey, Northern Copperheads are not a major threat to humans hiking in Connecticut’s woodlands.  For one, they are somewhat range- and habitat-restricted (not every large forest tract has a population of copperheads) and secondly, as Hammerson writes in his book: “…copperheads are passive and reclusive. They never aggressively attack a person, but will strike defensively if molested.”

Despite the menacing appearance of this snake in the photo, it was not threatening us.  Pit vipers have the ability to dislocate both of their upper and lower jaw bones from their skull, so that they can swallow prey larger than their normal mouth opening, and so that the four bones can work independently of each other to work the captured prey back into their mouths and into their throat.  Once prey has been swallowed, the jawbones are re-articulated.   The snake in this picture is realigning its jawbones, and not – as many might assume – threatening to bite us.