Snowy Owls in Milford and Stratford 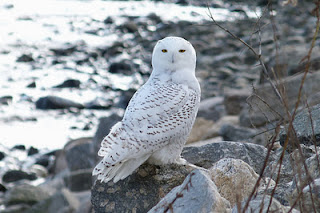 Snowy Owls have moved into Connecticut. One has been at our Milford Point Coastal Center and at least one other, and maybe two, has been across the Housatonic in the Sikorsky Airport area.

Here are excerpts from the Connecticut Ornithological Association’s daily compilation of bird sightings in the state:

The photo above was taken at Stratford Point two years ago and is copyright Connecticut Audubon Society.
Posted by Tom Andersen at 8:00 AM No comments:

Eurasian WigeonAnas penelope
Where to find it: Eurasian Wigeons (up to four males) have been visiting Milford in recent weeks, at the Mondo Ponds Nature Preserve and Education Center and Jonathan Law High School pond. Eurasian Wigeon can occur anywhere in Connecticut but are often found with concentrations of American Wigeon and Gadwall. Like any migratory waterfowl, they can depart without notice but often Eurasian Wigeons settle in for a while, as long as there is open water and they have a steady food source. The parking lot at Mondo Ponds is on Naugatuck Avenue; the high school is on Lansdale Avenue. Some winters, a male Eurasian Wigeon or two spend time in the mouth of the Housatonic River, often commuting between the Stratford Point and Short Beach area of Stratford, and the Wheeler Marsh and sandbars at Milford Point. Read the rest of this week's Bird Finder here...

Rusty Blackbird
Euphagus carolinus
Where to Find It: Rusty Blackbirds are now seeking out their wintering range. They are not common but you can find them in Connecticut, mixed in as individuals in flocks of other blackbirds species, or as small flocks of up to 30-plus individuals.

How to Find It: Look for them in farm fields and wooded swamps, or even occasionally at backyard feeders.To read the rest of this week's Connecticut Audubon Bird Finder, click here...

Photo by Dick Daniels, Carolinabirds.org.
Posted by Tom Andersen at 6:24 AM No comments:

We hope you enjoy it! Send us your feedback and let us know what we can do to make it better.
Posted by Tom Andersen at 5:35 PM No comments:

A Rare and Unusual Hybrid Duck in Stratford 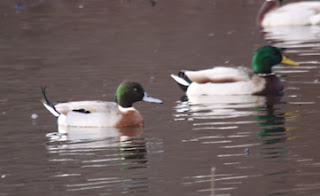 For several years this adult male Northern Pintail X Mallard (the bird on the left in the photo to the left) has returned to Wooster Pond on Freeman Avenue in Stratford where locals provide food for wintering waterfowl.

Waterfowl crossbreed more often than any other family of birds. Scientists have recorded more than 400 hybrid combinations among waterfowl species. Mallards crossbreed with nearly 50 other species, and Wood Ducks hybridize with a surprising 26 other species. Nearly 20 percent of waterfowl hybrid offspring are capable of reproducing, unusual in nature where hybrids are commonly sterile.

In general, hybridization is rare because each waterfowl species has unique characteristics that serve as barriers to interspecies mating. These characteristics include distinct physical attributes, behaviors, life-history requirements, and the unique ecological niche the species occupies. But on the breeding grounds, territories of many waterfowl species overlap, and barriers occasionally break down, presenting opportunities for interspecies mating.

Although this bird seems strange and unique, in North America one of the most common wild hybrids results from Mallard/Pintail breeding. Mallards also commonly crossbreed with Black Ducks, American Wigeon, Northern Shovelers, and Gadwalls.

Beyond creating interesting-looking ducks, hybridization can potentially lead to the extinction of a species. When individuals of two species mate and produce fertile offspring, which then mate with the parent species, this essentially contaminates the pure genes of that species. Mallards are highly aggressive breeders, and several cases involving Mallard hybridization with closely related species present waterfowl biologists with conservation challenges. 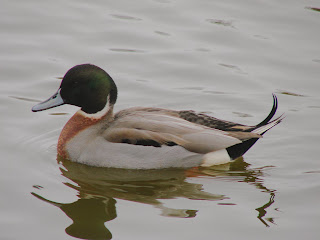 Changes to Black Duck migration and wintering habitat have also fostered encroachment by Mallards. Forests that once separated these species have been cleared, giving Mallards more opportunities to interact with Black Ducks during the nonbreeding season. Interspecies interactions on the wintering grounds are important because this is when waterfowl form pair bonds for the upcoming breeding season. This interaction could lead to mixed-species pairing and contribute to the hybridization problem.

Although Mallard/Black Duck hybridization is an ongoing issue, the two species coexist for the most part in Connecticut and by far the greatest threat to Black Duck survival is the loss of suitable nesting and wintering habitat.

This beautiful, but strange looking hybrid reminds us that the fascinating world of birds is a complex and ever-changing natural system. -- Milan Bull, Senior Director of Science and Conservation