Check out this oddity and see if you can figure out what is going on! A visitor to the Connecticut Audubon Society Center at Glastonbury named Jane sent these photos of a female leucistic pied Northern Cardinal to Director Cynthia Bartholomew, who passed them along to the conservation department. 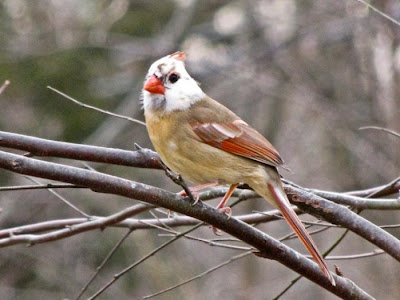 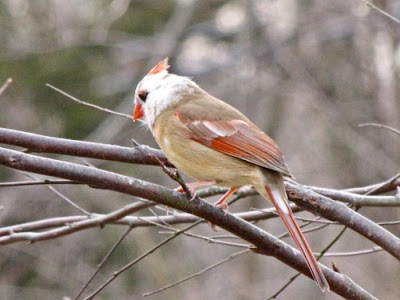 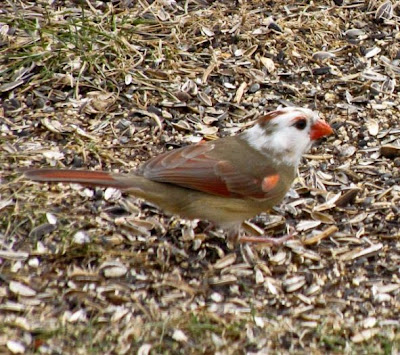 Jane did not need our help to figure out what was going on with this gal as she determined the cause of the aberrant appearance herself. Leucism is essentially a reduced pigmentation as normal colors still occur over much of the feathers. It is not the same condition as albinism, a mutation that prevents melanin from being produced at all. You'll notice I said this bird was pied, a term for birds with patches of white. Others are called pale as their entire body has a reduction in pigmentation, though in the same manner or to the same degree as an albinistic bird.

Leucism is rare in birds, and albinism is exceptionally rare. If you feed your backyard birds for many years you stand a good chance of seeing a leucistic bird at some point. I once had an American Tree Sparrow that closely resembled the look of Jane's bird, with the head and only a couple small patches on the body being affected by the mutation. That would be another pied individual, the more common type of leucism.

One good thing about such genetic conditions - for bird watchers at least - is that you can easily track this bird. This can help you get an idea of how long one individual remains in your yard each day, what times they come and go, if they are a year-round resident, if they come by feeding young in the summer, and so forth. Such a marked and unique individual can provide a lot of insight into the life of a specific bird you might not otherwise be such attention to.