On April 6 I noticed a Red Fox roaming around Stratford Point in broad daylight while surveying the property. We have a known fox den in front of the main building on the edge of the mowed lawn and grasslands that has been inhabited since last year. Getting a look at this individual showed it was healthy and behaving precisely as one should...when it has pups to feed. At this time of year you may see them during the day because they have to do some extra hunting to feed a young family. Sure enough my suspicions were proven to be correct as CAS Director of Conservation Services Anthony Zemba got this sensational photo of mom and a pup later that week. 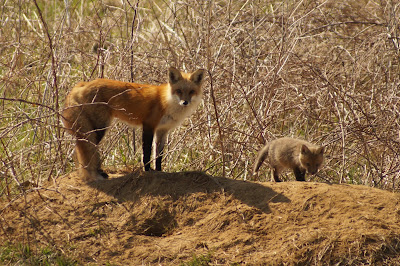 Anthony said that he believes there are two pups. We have also had reports of them at other locations in Stratford, Milford, and Bridgeport recently. The point is that while it is odd to see them during the daylight hours out in the open do not automatically assume they are sick or injured. When it is spring it may just be a hard-working parent looking to provide for the next generation.

Photo by Anthony Zemba © Connecticut Audubon Society and not to be reproduced without explicit CAS permission
Posted by Scott Kruitbosch at 8:00 AM