It was a cold and cloudy morning at Stratford Point today, with a steady westerly wind keeping all of our visitors bundled up while they scoped out waterfowl. Upland birds were quite quiet, though early in the morning Twan got a brief glimpse of a bird that was likely the Palm Warbler spotted during the Stratford-Milford Christmas Bird Count at nearby Russian Beach. 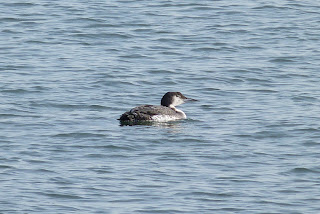 We had good views of both typical loon species - do you know which one this is?
Here's the full list:


This continues to be a somewhat slow winter for uncommon upland birds that can frequent Stratford Point in winter like Eastern Meadowlark and Short-eared Owl. We still have a lack of any snow along with above-average temperatures in much of the region. It was frigid for a short time this week but that will be coming to an end with temperatures nearing 50 this weekend. Some species, like Mallard, American Black Duck, and Canada Goose were clearly moving south as waters to the north froze, but that will not be a problem.

What a strange season...keep an eye out for our February walk date which may come after the prescribed burn of the site.