About a week ago, I spotted this snapping turtle moving through my yard on a rainy afternoon. 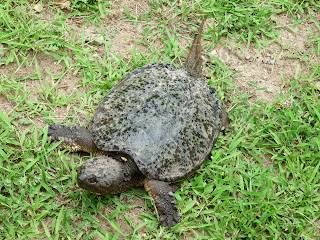 It was a large one, though not as big as some I have seen passing through here in past years. It was on a mission, walking up from the wet woods through the lawn towards the house, even stopping on the patio. It maintained a steady pace except for when I was near it. Here it is in HD video...

Twan, being a herpetologist, helped me out with the details on it. He said that based on the smooth shell - the dorsal keels being almost entirely gone - it had to be a relatively old individual. It is difficult to put this into precise years, but likely over ten. Given where it was and based on the relatively small head, he felt that it was a gravid female looking for a good spot to lay her eggs. He also said that snapping turtles look for sun-exposed and relatively dry spots to lay their eggs. This might even be in the middle of a residential yard.

Twan and I saw at least four snapping turtles in the pond at our John W. Field Sanctuary in Fairfield yesterday while conducting mapping and survey work. This likely explained why there were no young Canada Geese there with the adults. However, there were at least five little Wood Ducks being watched over closely by mom. She will have to be quite vigilant to protect them all.