Usually around this time of year we receive phone calls and emails inquiring about the identity of mysterious creatures that appear in people's yards and which resemble miniature hummingbirds. These small animals visit hummingbird's favorite food plants, buzzing erratically from flower to flower and only stopping a split second at each to collect some nectar.

The Hummingbird Clearwing Moth (Hemaris thysbe) is one of three species of clearwing moth found in Connecticut. All three have a hummingbird-like flight and all three favor the red, pink and purple flowers that are often frequented by our local Ruby-throated Hummingbirds. 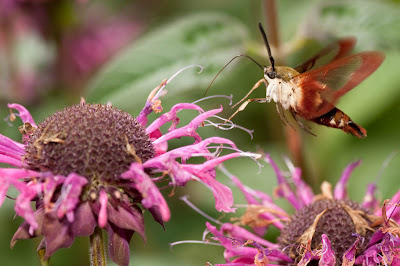 Hummingbird Clearwings are members of the Sphinx Moth family (Sphingidae) - a large group of fast-flying moths. The clearwings are somewhat unusual in this group in that they fly during the day, while most moths are nocturnal. Different species of clearwings imitate hummingbirds or bees in their appearance and behavior, briefly hovering in front of flowers and slurping up some nectar from each through a long proboscis that acts as a straw. When not in use, this proboscis is rolled up underneath the moth's head. These moths have a very rapid wingbeat of 25-30 beats per second, making it hard to discern their wings at times. Gyrating movements of their wings allow the moth to hover in mid-air and move forward or backward with great ease - similar to a hummingbird's aerial acrobatics. 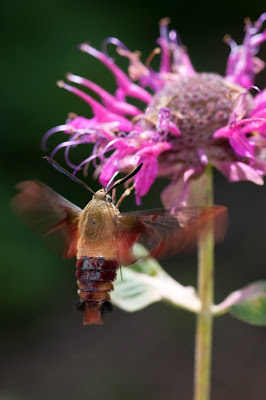 Occasionally one can see the moth briefly touching a flower with its first pair of legs but generally they feed at a slight distance from the flower. This behavior is thought to help them avoid unwanted confrontations with sit-and-wait predators that perch on flowers, such as crab spiders or praying mantises. 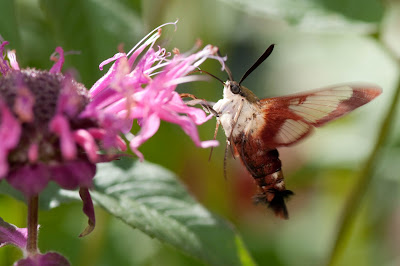 Take a closer look at your favorite hummingbird and butterfly plants during a sunny spell - you may very well spot one of these tiny hummingbird mimics buzzing around your own yard as well!

Mark Szantyr kindly shared a few images of a similar and closely-related species that is commonly found in our area, the Snowberry Clearwing Moth (Hemaris diffinis). This species differs in having a boldy banded black-and-yellow or black-and-orange abdomen, making it more of a bumblebee mimic than a hummingbird look-alike! 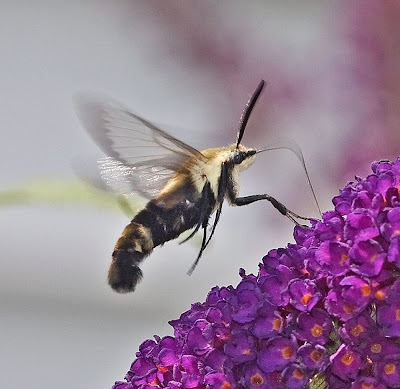 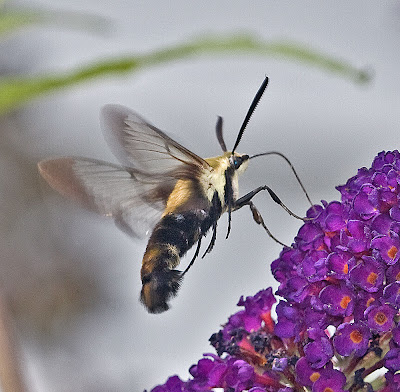