Some of the most common questions and complaints I receive via email and in person on walks and at talks are concerning raptors hunting and preying upon passerine birds at backyard feeders. What kind of hawk is doing this to my yard? Why won't it go away? What can I do to stop it? How come it is not more afraid of me? Shouldn't the birds be doing more to protect themselves? Is there a way I can build my feeding stations to keep hawks out of the area? Should I take my feeders down or stop feeding the birds altogether until this hawk goes away or because I am killing all of the little ones? And so forth.

I realize how difficult it can be to watch your feathered friends be hunted, injured, or killed by a raptor. After all you are spending your time and money to put out food for them, to help them survive a little easier in the tough winter season, and to enjoy watching them from your home. I have done this for many years of my life, including when I was a small child. When it comes to kids it can be challenging for them to understand what happens in this process, but everyone else should try to be aware of what is actually occurring. Then we can mostly accept it, continue our role in the lives of our backyard birds, and even appreciate on some level the chain of life that inhabits our neighborhoods.

The most common two species that take aim at feeder birds are the Sharp-shinned Hawk and the Cooper's Hawk. One Sharp-shinned Hawk visited me last week during a brief snow shower in the late afternoon, and while I did not see the attack I saw the aftermath with it picking apart and devouring a Dark-eyed Junco. 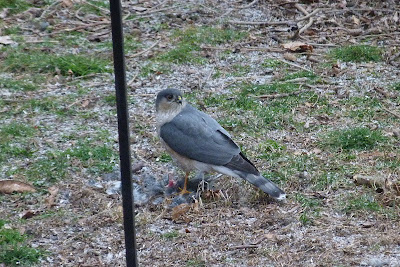 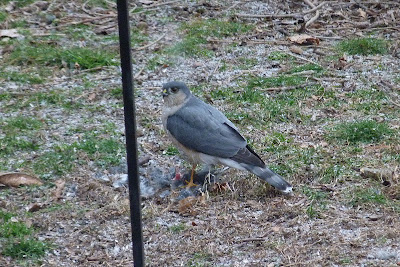 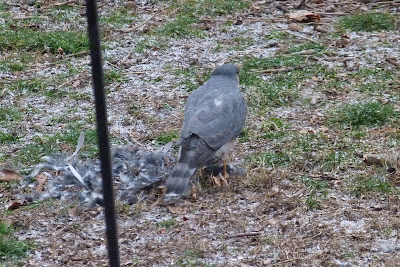 While looking at the first two photos notice how the raptor looks to one side and then the other as it continually scans the immediate area for threats. This could include humans, more small birds that could mob it or larger raptors that could easily overpower this small hawk. If you see the size of the pile of feathers in the third photo you will be able to note that not only do Dark-eyed Juncos have a lot of insulation but that this is a small hawk as well. It eventually left after being disturbed by people, carrying what remained of its meal along with it, leaving only feathers.

These are accipiters that specialize in hunting birds in the woodlands. They are thin birds with a long tail plus broad, strong, round wings that all serve them well in navigating through trees and brush at a high rate of speed in pursuit of winged prey. They'll often take a very fast dive at a group of birds, going after the one that moves out of the way the slowest or does not see them at all. They may pursue them for a few minutes, even into thick tangles, hoping to have the endurance and then speed to overtake their prey. Sometimes, if the birds scatter too effectively, you may see one of these raptors sitting in the open in the feeder area, analyzing its options, resting for a minute, or hoping one of the small birds makes a mistake and returns thinking that the attacker has left the area.

Occasionally there will be other raptor species taking a look at your feeding area. Red-tailed Hawks are known to make an attack - extremely impressive ones considering their large size - but they will often be after a mammal instead such as a Gray Squirrel or an Eastern Chipmunk. Take a look at this bird that visited my yard several years ago! 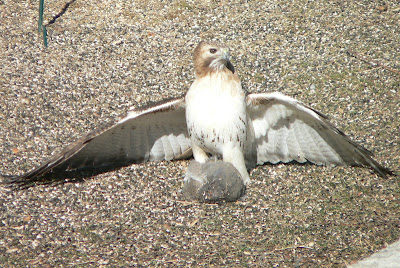 This squirrel looked all but dead by the time I took the photo. It had curled into a ball for protection but it was not moving whatsoever while the Red-tail dug into it deeper and pulled at it with its bill. I saw the Red-tailed Hawk dive-bomb the area and crash right onto the ground onto this squirrel out of the corner of my eye, startling me with its size and sudden appearance. The Red-tail took off shortly after and, while about 10-15 feet in the air, the squirrel shook itself out of the talons! It dashed under a nearby car and the hawk's meal was gone. This was in the middle of a frigid January like this one, and it probably cost the raptor a lot. The squirrel was surely mortality wounded...or was it? Actually no, and over the next week I took careful note of the squirrel with several large talon scratches and holes over its back, and these wounds appeared to miraculously heal. They are tough creatures.

As I alluded to, the key in all of this is that the raptors have to find their own meals in order to survive as well. What is to say they are not as important as the feeder birds? In some cases the species may be at a higher risk overall with, say, a Cooper's Hawk feeding on a very common Mourning Dove. The key to contentment in the backyard is to remember that they are feathered friends of another family in desperate need of food. Many raptors end up starving to death, especially young birds, and this method of hunting streamlines the process a little for them. If they weren't in your yard they would be hunting another bird or mammal somewhere else, and it is not your fault if they are successful. This is a healthy process - survival of the fittest - that weeds out the sick and weak of the prey populations to ensure the continued success of their species for generations to come.

It is best to keep this in mind while watching out your window and to tell children about it whenever they see such an attack, explaining the evolutionary function it serves, the importance of the food chain, and that these larger birds need to forage in their own way as well.