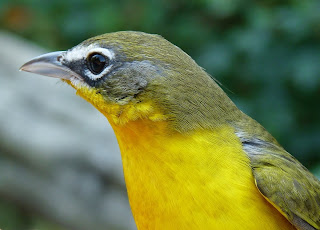 It's that time again! The Connecticut Audubon Society operates two bird banding stations: one in Fairfield at the Birdcraft Sanctuary and Museum, and another at the Coastal Center at Milford Point. Volunteers licensed by the U.S. Fish and Wildlife Service run these stations. Birds are captured using mist nets from which they are removed then measured, weighed, and banded. They are released completely unharmed after this process. The rare Yellow-breasted Chat in the above picture was mist-netted at Birdcraft in the fall of 2009. 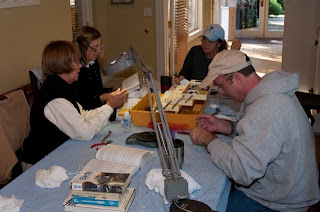 Banding at Birdcraft in Fairfield.

The banding station at Birdcraft in Fairfield runs weekdays in the spring and the fall. The spring operation commenced on April 1 and will continue through Memorial Day. 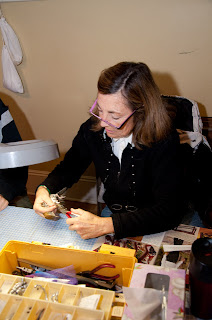 The Milford Point banding station will kick off the season on Tuesday, April 27. The nets will open at 6AM in hopes of netting newly-arrived spring migrants. 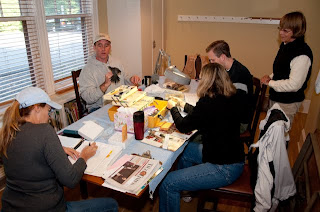 Can you find the Gray Catbird?
More than 20,000 birds have been banded at Birdcraft since 1979. Visitors are always welcome to come and observe mist-netting and banding in action. Demonstrations in Fairfield are available to any group by appointment. It something that anyone with an interest in birds should experience at least once. You will not be disappointed!