Before Joining CAS I spent almost 15 years studying critically endangered amphibian species in the tropics and trying to protect them from their biggest threat: a sudden outbreak of a pathogen, the fungus Batrachochytrium dendrobatidis (often abbreviated as Bd or called "chytrid fungus") that causes a deadly disease in frogs and some salamanders. This disease, chytridiomycosis, has run unchecked throughout our planet over the last 25 years, wiping out or decimating amphibian populations everywhere. Cloud forest regions and other highland habitats in the tropics are particularly hit hard by this water-borne fungus, due to the pathogen's preference for relatively cool and moist habitats. The devastating loss of biodiversity caused by this disease led to the proclamation of the international Year of the Frog last year, to draw attention to the plight of amphibians worldwide. More bad news regarding new outbreaks is reported almost weekly still (see this sobering article that was released in yesterday's Scientific American, for example). 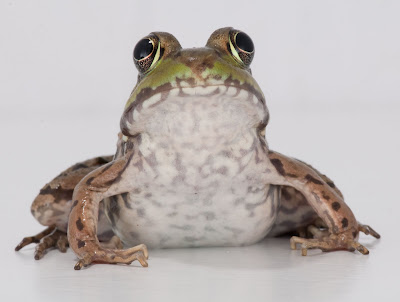 Connecticut frogs, such as this Green Frogs (Rana clamitans) may be carrying a deadly disease
Bd has been detected almost anywhere on the planet by now, but one of the few places from which we still have no data is -surprisingly - right here in New England! In addition, recent molecular studies have hinted at the fact that the fungus and the disease it causes may have actually originated here a long time ago and spread across the globe in recent years. Obviously, it is important to investigate the potential occurrence of this dangerous pathogen here in CT and the implications it may have for our local fauna. A Ph.D. student from Yale University, Kathryn Richards-Hrdlicka, is currently investigating the question of whether Bd indeed is native to New England and I have teamed up with her, with the Wildlife Division of the Department of Environmental Protection (DEP) and with biologists from White Memorial Foundation in Litchfield to see if the fungus is present here and if so, what that means for our amphibian populations.

It is impossible to assess whether a frog or salamander is infected with the fungus simply by looking at it. Only once it develops the disease chytridiomycosis does it become symptomatic, but amphibians tend to die so quickly once they develop the disease that sick animals are rarely found. In order to check whether our local frogs are infected, skin swabs are taken by gently scraping a toothpick over the skin of the animal and subsequently analyzing the few skin cells that stick to the toothpick in the lab to see whether DNA of the Bd fungus is present. This is a highly complex and sensitive analytical technique that depends on a much less sophisticated technique for its success: that of jumping in a swamp and catching lots of frogs to obtain a large enough sample size. 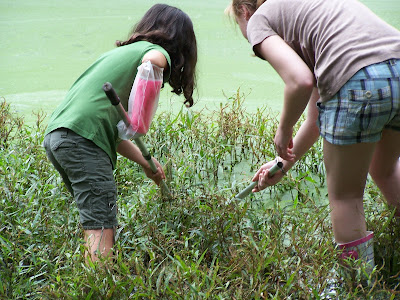 Camp kids and counsellors were equally poised to get more frogs...
After many years of fieldwork doing this type of research I have become a pretty good frog catcher. However, anyone who has little kids knows that my skills are likely put to shame by any 6 year old with a healthy outdoor spirit. That's why last week I teamed up with a group of summer camp participants and their counsellors at our Larssen Sanctuary in Fairfield to do some screening of the local amphibian populations. Within the span of about an hour and a half of frantic splashing, diving and netting we ended up with over 50 amphibians representing 8 species and we all had a blast. As far as I'm concerned, there are few things more enjoyable than spending a really hot summer day mucking around in a pond with a bunch of friends! 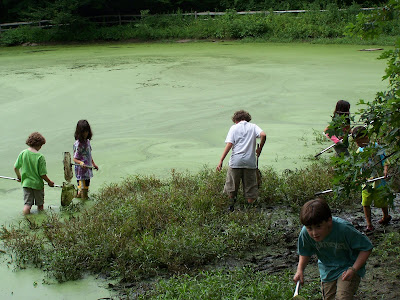 Of course everyone got appropriately mucky in the process! 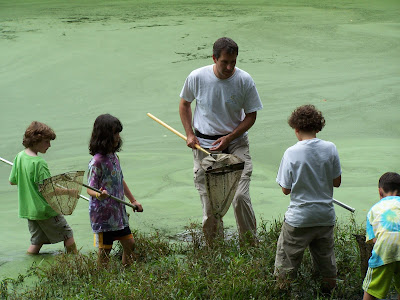 Once our catch was in, we set up shop in a shaded spot and I swabbed many frogs, salamanders and tadpoles to collect a good number of samples for analysis. 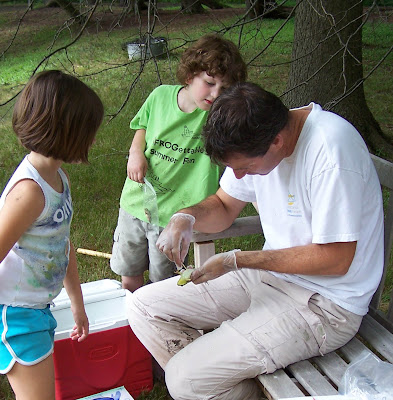 A Bullfrog gets a tummy rub with a toothpick to collect some skin cells for analysis
The swabbing procedure is entirely non-invasive and no animals are hurt in the process. Samples will go into the lab this week and hopefully we'll have results soon. Preliminary results of some of our pilot samples indicate that the fungus may indeed be present in Connecticut, but so far it seems that local amphibian populations are still healthy. The fact that we can catch more than 50 indiviudals in such a small area and in such a short time is encouraging!

Field work for this project is just getting underway and we'll need to get much larger sample sizes before we can form a clearer picture of whether our amphibians are at risk. I'll certainly keep you posted on our progress. In the meantime, keep your fingers crossed!