Osprey up close and personal at CAS Coastal Center in Milford and in your home! 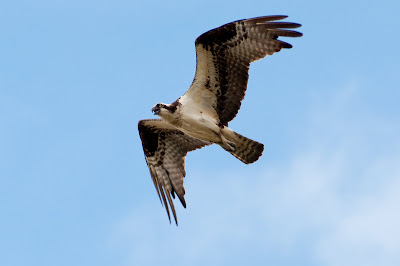 For several years, the Connecticut Audubon Society Coastal Center at Milford Point has had a webcam trained on one of the Osprey nesting platforms in the Wheeler Marsh, right in front of the center's spectacular viewing window. Unknown technical problems caused the camera to short out through much of last year's breeding season and it was only then that we realized exactly how many people follow the everyday lives of "our" Osprey and their chicks: calls and emails arrived literally from all over the planet asking when the camera would be operational again.
On March 24, CAS senior director of Science and Conservation, Milan Bull, and CAS conservation biologist Twan Leenders donned waders and braved freezing cold water and 35mph sustained winds to find out if the camera was fixable. 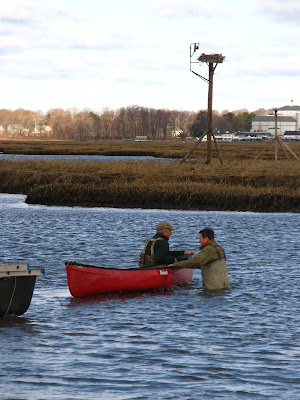 An inspection of the wiring revealed that one of the splices near the nest platform had leaked and caused a short. We also discovered that the female Osprey was already back in the marsh and while we were working near the nest two more Osprey returned from their wintering grounds, including the male of the resident pair. He did not waste any time and was soon spotted carrying a prize rainbow trout to impress the female. We knew that time was of the essence since we did not want to disturb the birds with our presence. The camera was removed from the nest for a quick check-up and it was decided that a whole new cable was needed for the video feed. We decided to leave our ladder at the base of the platform and return the next day.... 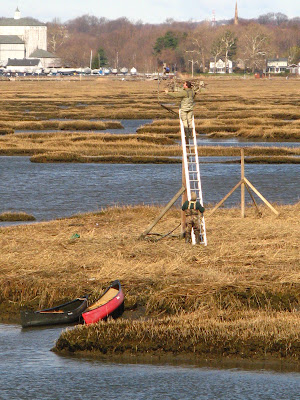 ...which was when a big rain storm hit and compeletely flooded the marsh (and our ladder) for several days! 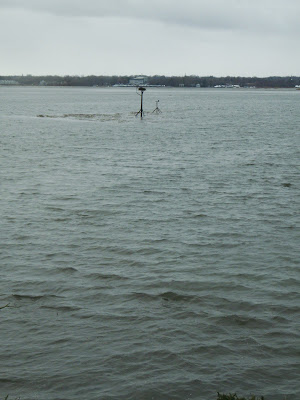 The weather conditions for the subsequent days were simply not conducive to go back out to the nest and with every passing day our window to get the camera in place was getting smaller. The new cable and camera had to be installed before the Osprey laid their first egg.
Everything was hooked up and tested indoors, waiting for a break in the weather. 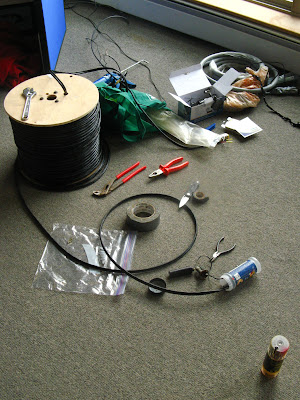 On April 1 that break came and Frank Gallo, director of the CAS Coastal Center, and Twan Leenders slogged out through more than knee-deep saltmarsh mud with a canoe full of equipment to lay out 1000 feet of new video cable to the nest platform and to install the camera. 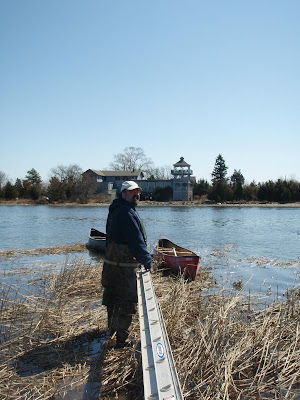 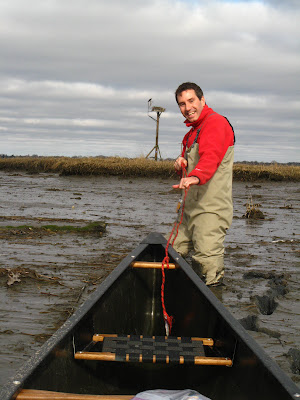 Note that the Osprey pair has become quite territorial at this point and the birds are never far from their nest, carefully eying our every move... 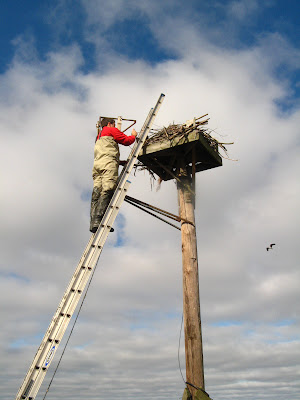 Luckily the operation was a success and the video feed was restored to the monitor in the Coastal Center that day. By now (April 6) background information on the status of "our" Osprey and a live feed of the pair's antics can be found at this link. Just in time, because around 6AM this morning the first egg was laid! Hopefully you will now be able to enjoy the daily life of the Osprey family as much as we do, from the comfort of your home. Or, come pay them a visit at the CAS Coastal Center at Milford Point - it is well worth it!
Osprey photograph by Twan Leenders, additional photographs by Frank Gallo and Twan Leenders
Posted by Twan Leenders at 11:01 PM