During the first two weeks of March, Connecticut Audubon Society staff members Frank Gallo and Twan Leenders travel to a Costa Rican rainforest preserve with students and staff from three Litchfield high schools as part of a year-long tropical biology class. Students carry out important research projects, some of which have been ongoing for 19 years. This is part I of a series of blog posts introducing the students, their projects and our results. Part I is written by Frank Gallo, who leads the bird team. 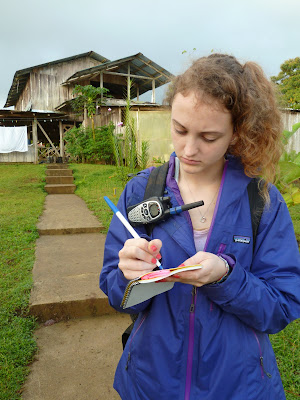 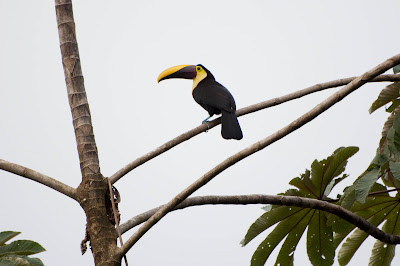 A chestnut-mandibed Toucan visits the clearing near the station

I am the Bird Team leader; our project has had a long term focus on neotropical migrants, birds that summer in the U.S. and spend the rest of the year living in the tropics. (Many of the migrant species in our study area have breeding populations in New England.) Initially, we had to overcome the difficulties of simply catching these birds in the dense rainforests of the reserve. 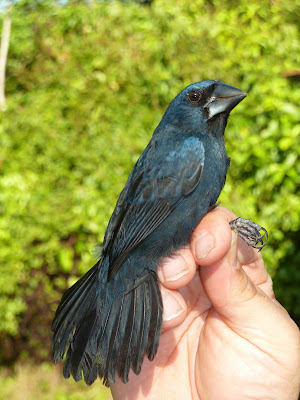 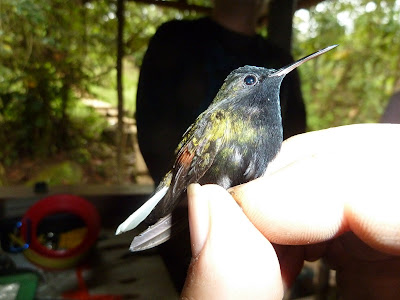 After developing successful netting technologies to do so, we began a long-term study to band and release migrants. It has long been known that neotropical migrants, such as Wood Thrush, and Golden-winged Warblers, winter in Costa Rica. Our focus was to determine whether individuals of given species return annually to the same place; in this case the Rara Avis reserve. Thus far, as a result of our work, 50 migrants, representing ten species, have been banded at Rara Avis by the project. Most exciting is that three individuals, a Chestnut-sided Warbler, a Louisiana Waterthrush, and most recently, a Wood Thrush, have been recaptured in different years. In the case of the Waterthrush and Chestnut-sided Warbler, both have been re-caught three times over a four-year period, in the same location, and in most cases, even the same tree. As is the case in many instances on the breeding grounds, these birds are returning to the same site; in Costa Rica, they join flocks and winter in exactly the same location year-after-year. 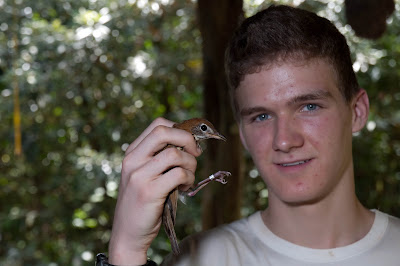 Matt Markelon holds a recently banded Wood Thrush, a Neotropical migrant about to leave for its northern breeding grounds 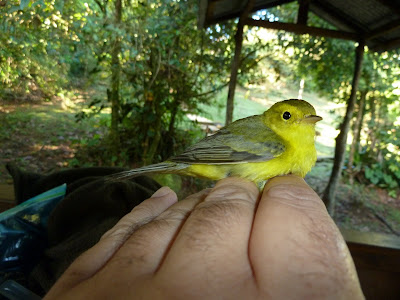 Another Neotropical migrant caught and banded: a female Wilson's Warbler

In the future, we hope to determine where in the U.S. these birds are summering, by using a technique that checks for stable isotopes of elements in their feathers or toenails. Think of the conservation implications of being able to say that this specific population of Wood Thrush breeds in southern New England, or even Connecticut, and winters in the Mountains of Costa Rica. "Our birds" are part of a global economy! 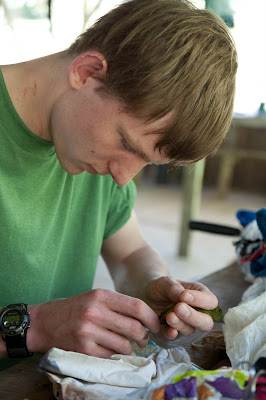 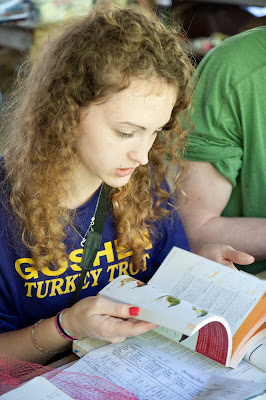 It is not always easy to identify your catch in a reserve with 400+ bird species on its list! 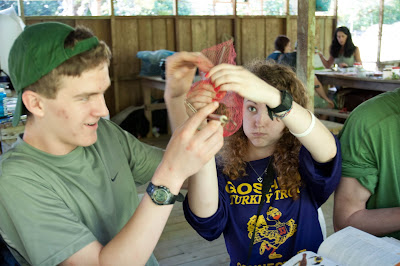 Birds are weighed, aged, sexed and checked for the presence of body fat - an indication that a migrant is ready to start its journey north. 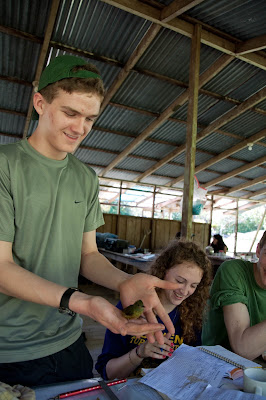 Over the years, the bird project has often expanded its scope. Now, working in collaboration with other researchers, we are also catching and banding local fruit-eating birds, such as White-ruffed Manakins. These birds are being tagged as part of long-term breeding and altitudinal migration studies. 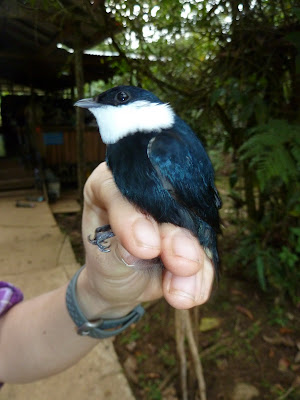 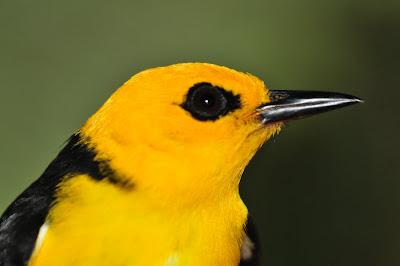 This year's bird team, consisted of students from all three high schools involved: Faye Curran from Wamogo Regional High School, Christopher Moran from the Forman School, and Matt Markelon from Litchfield High School. Our team was able to net in different habitats than previous groups. Not surprisingly, we caught several species new to our cumulative list, which now stands at 1015 individuals of 98 species. We added nine species, the highest number since 2006, including the incredible Royal Flycatcher, and the impressive Blue-black Grosbeak, which has a bill rivaling that of an Evening Grosbeak. (Yes, they bite!) 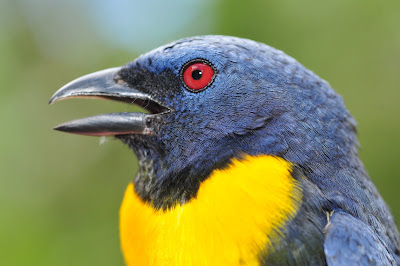 At Rara Avis, we set up nets on new trails, and were able to net a few species we've only caught on one other occasion, the army ant-dependent, Ocellated Antbird, the canopy-loving Blue and Gold Tanager, and the diminutive but feisty, Black-bellied Hummingbird. 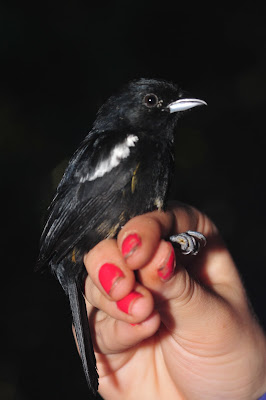 Overall, this year's team broke several records, achieving a new high total for netted species with 48, nine more than our previous high of 39 set in 2006, and banding 7 neotropical migrants, again a new high. We tallied four Wood Thrush, one Ovenbird, one Louisiana Waterthrush, and added a new species to our list, a young female Wilson's Warbler. A banded Wood Thrush was also seen, but we were unable to capture it; it is very likely one of the 15 Wood Thrushes we have captured prior to this year (its leg band was worn and dirty, not new), that is still using the area. In addition, seven White-ruffed Manakins were captured and banded for other researchers, and seven of previously banded birds were recaptured, adding critical data to regional studies. 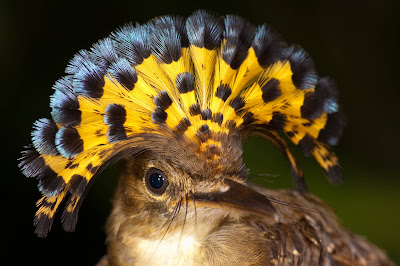 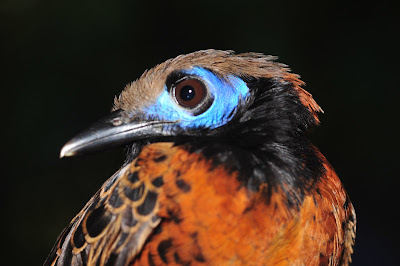 More information on other studies carried out as part of this project will follow shortly. For those interested: all teams will present their findings to the public during the annual dissertation day on April 28 at The Forman School in Litchfield.