Last Friday we received word from Geoff Krukar of the Connecticut Department of Energy and Environmental Protection that one of Gazebo Phil's banded Purple Martins had already been spotted away from his gourds. In case you missed it, you can see more information about the banded Purple Martins here and check out this lengthy HD video of the actual banding process at Gazebo Phil's that I shot when we went to band his young birds. As you can see, Phil's birds were given red color bands. Even at a distance you can identify a bird belonging to one of the six largest Purple Martin colonies in Connecticut with these different colors. 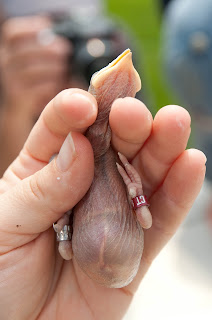 A look at the bands once again
Geoff said this bird was found at another one of those colonies in Clinton, meaning it traveled over 40 miles to get there around three weeks after it had been banded! This bird not only learned how to fly and function for itself, it went that far from "home" in exploring its surroundings. I should also note this bird traveled east instead of west. You may think of this as the wrong direction, but it very likely did not intend to head for South America yet. This is evidence of dispersal; young leaving their parents range to find their own in the future, aiding the genetic makeup of the species and, quite simply, finding a gourd of their own for next year. This bird will have a wing up on the competition already finding a possible nesting location in a very suitable location.

Who knows, perhaps this individual will go even further in another direction. Isn't it amazing that they can find their own species so easily or a perfect habitat so readily? This is exactly why color banding is so important as it helps us understand these processes. Geoff also mentioned that he read a report of a young bird in New Jersey seen 100 miles from where it was banded only one month later. Purple Martins definitely get on the move quickly. Please keep an eye out for more color banded martins (check the colors again here) and send a report to the CT DEEP or CAS if you spot one.

Photo © Twan Leenders
Posted by Scott Kruitbosch at 10:48 AM