Porcupines and more at Croft Sanctuary

This past Thursday, CAS Science and Conservation staff once again joined forces with the summer campers from the Coastal Center at Milford Point led by Frank Gallo. Our mission was to explore the CAS Croft Preserve and find all the life that we could in this sprawling and spectacular 700-acre sanctuary. As you can read on our website Croft includes upland hardwood forest, hemlock groves, managed early successional habitat, bogs, swamps and beaver ponds. It is managed for wildlife, not humans, and the very limited trail system is exceptionally rough and difficult to navigate. It is full of undergrowth, steep, muddy, rocky, and very slow going for even those in the best physical shape.

Those campers had been through a summer full of outdoor activity across Connecticut and were certainly up to the Croft challenge. Looking at the date and mid-day walk scheduled, we figured we would find a few birds but also focus on mammals along with reptiles and amphibians. I arrived before them, and Twan arrived before all of us, so I walked in to meet him as the skies got darker. Rain and possible storms were on the way.

Earlier Twan had stopped to take a call from me and looked up to see a porcupine in a tree. As I stopped on the trail to call Twan about the weather, I found another porcupine in the same way! Yes, we were lucky, but this is a frequent occurrence as there are many in Croft. We certainly had a couple of targets for the campers...at least until it started pouring. You cannot just leave Croft - you have to follow the one trail in and out and hike it as best you can. We made good time but were soaked through as we arrived to see the Milford Point staff and campers had arrived. 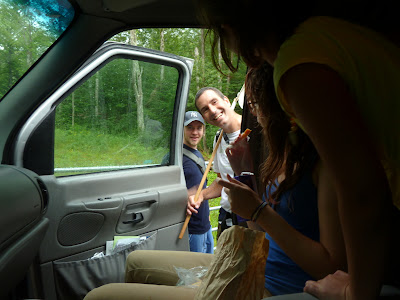 Two drenched but happy guys met by Frank Gallo and co. (Twan Leenders front, Scott Kruitbosch back)
Fortunately, the heavy showers passed, there were no storms, and we could take them in to Croft. While we missed my porcupine, we found Twan's again, and it posed for everyone. There were plenty of people in awe, including the adults. 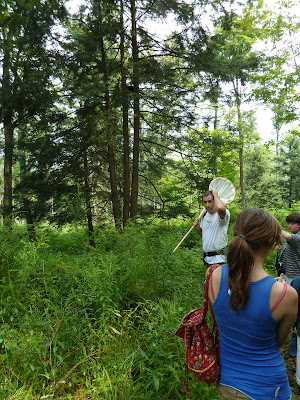 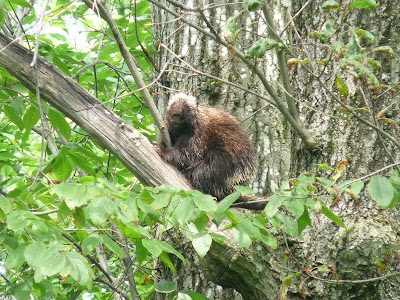 Very obliging porcupine
We pressed on, hearing birds like Eastern Wood-Pewee, Chestnut-sided Warbler, Eastern Towhee, Gray Catbird, and more. The next stop along the trail was to see something else Twan had discovered earlier in the day - bobcat footprints! 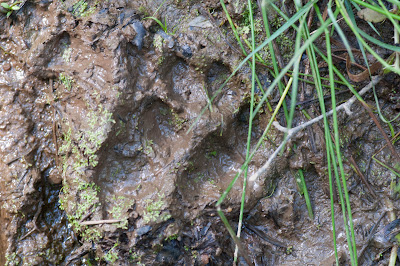 By the time we had arrived, the rain had washed them away somewhat but they were still identifiable. These were of course quite fresh and Twan probably hadn't missed it by much in the morning. They move so quickly they even beat the wildlife cameras we sometimes put out in parts of the preserve. Check this shot out from winter as an example. 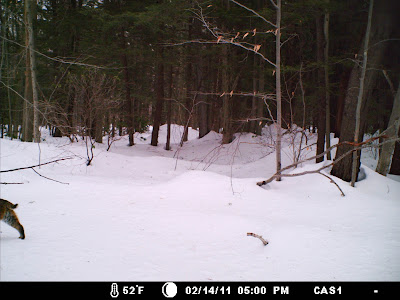 From there it was something of everything as we headed to a large clearing created as more early successional habitat by CAS staff and volunteers. It is thriving and has changed a great deal since this work started. I spotted the third porcupine of the day in one of the remaining trees as we rested and the campers found salamanders. 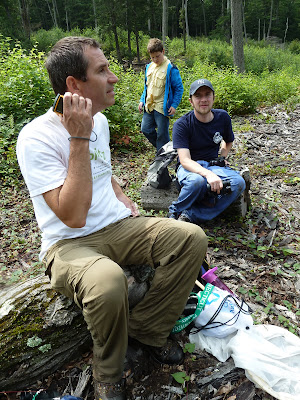 A brief break for the Science & Conservation staff
Here are many more shots of everyone in action... 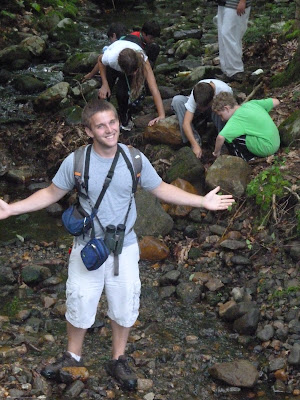 Counselor Kevin McFadden, who did everything and more for the kids this summer, enjoying the fantastic habitat 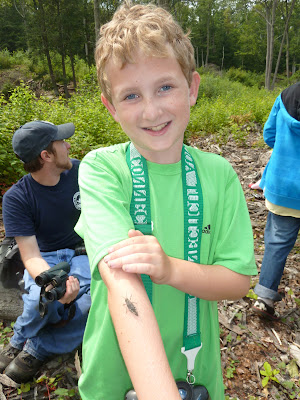 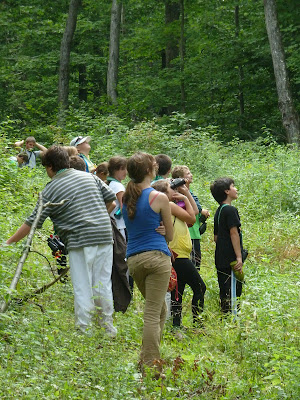 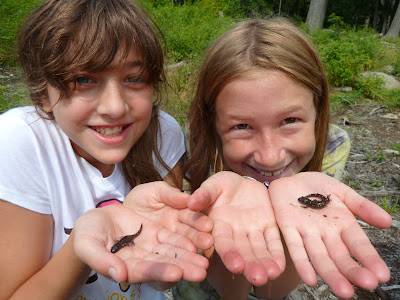 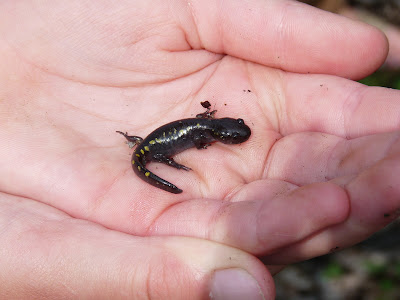 A Spotted Salamander! The kids found many as Croft might be home to the largest Connecticut population 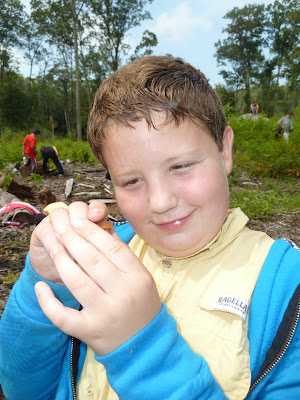 There were also many red efts, the terrestrial stage of Eastern Newts 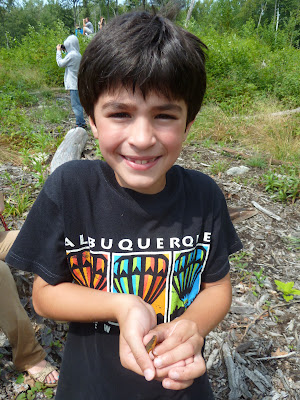 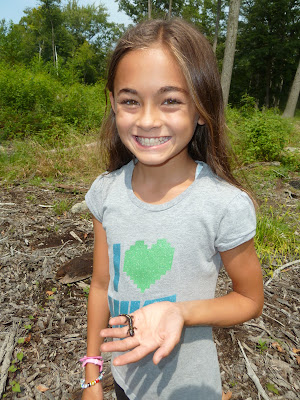 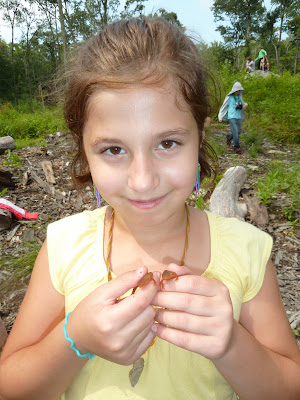 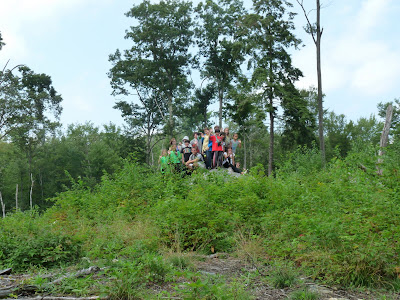 The campers headed back home from there while Twan and I continued through the sanctuary, surveying more areas and recording more life of every kind all around us. From carnivorous plants to moose, this lifelong Connecticut shoreline resident still cannot believe these sights are possible in the state. 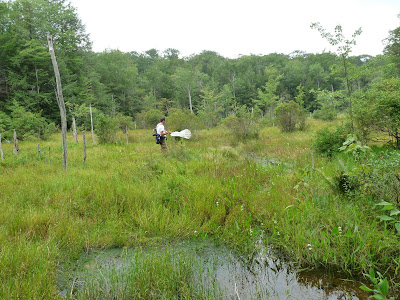 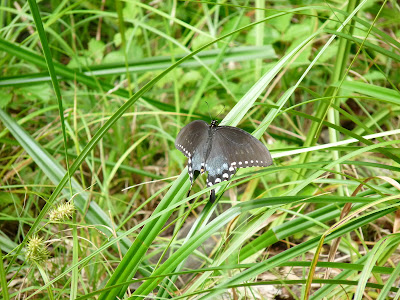 Spicebush Swallowtail
That night we were told the campers found moose prints on their way out! Twan and I did not see them, though we did encounter fresh bear scat, missing one that had came across the trail not long before us. Black bears enjoy the blueberries and raspberries growing in abundance throughout Croft.

If you ever want an incredibly challenging but rewarding hike you should check out Croft, but please take our warnings seriously - it will take a physical toll on anyone and you may encounter some a great deal of wildlife you might not expect in your backyard.