I had some good luck last week, as I was able to spot two uncommonly seen mammals, a coyote and a red fox, in two days. The first one was the coyote. It ran out in front of me across the path to the beach at the Coastal Center at Milford Point, going from dune to dune through the grasses. It did not stop or even glance at me.

Director Frank Gallo mentioned to me how often he has seen red foxes going by in broad daylight lately, too. This is a prime time for these animals to be feeding young. They do not have to be ill or injured to be seen in such a way. They are not a threat to us, either. Ironically, at Stratford Point around 8AM the next day, I was walking out to meet Twan as he was already in the upland area surveying plants and insects. I saw a red fox staring at him from a distance by the main gate. I should have taken a photo of it first, but silly me shouted over to Twan to point it out. It took off like a shot and ran into the brush. 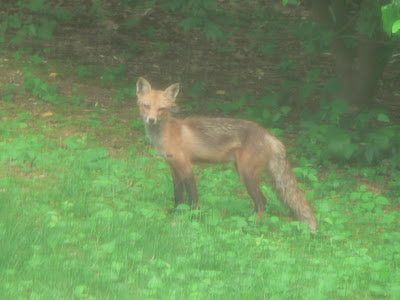 An old distant photo of a red fox from my yard
These mammals are all around us nearly every day, and we as a society typically only hear about the bad encounters. There are plenty of enjoyable sightings like these. Sometimes they're on a mission feeding a growing family. Other times they may be as interested in you as you are in them. That fox was wondering what Twan was up to and watching from a distance. Once I had a red fox slowly creep up to me from behind in the woods. I didn't hear a peep until it was about 10 feet away. I turned, we made eye contact, and it backed away slowly before dashing off. I think it was only curious as to what I was doing as I was stalking a warbler and taking photos of it.

Twan had a mammal encounter of another kind. He has a wildlife camera trained on his compost pile. Lately it has been snapping off skunk shots nonstop, but he also gets a near nightly visit from a rare gray fox. 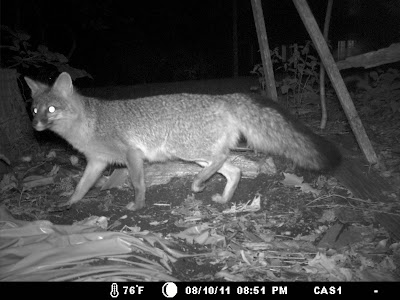 That is one I would love to see up close and personal. We enjoyed some more amazing Connecticut mammals in our Croft Sanctuary yesterday...watch for that post soon!