Despite the cold and the snow one species has been on the move as always - the Fox Sparrow. They can be found in sizable numbers certain seasons in exposed or favorable feeding areas when Connecticut sees major snow in March as they push through the conditions and head up the coast seemingly no matter what. They are able to survive here and overwinter and as such are capable of dealing with a winter blast as we enter spring. During some convective snow showers earlier this week I found at least four of them at my feeders.

I had Fox Sparrow with me at home for most of the winter and apparently the new arrivals also enjoyed the dining selections. I was outside in the early morning without binoculars and thought I had seen one from a distance, but after another similar bird and another went after it I figured I was tired and somehow making Song Sparrows into Fox Sparrows. You do not expect to see bunches of them flitting around your yard. Once I woke up a little more and got a little closer (and remembered the date) I figured out what I was watching.

Here is a wide shot of three of the four (if not five or six or more around).

Take a look at this photo and see if you notice what was helping to trick me. 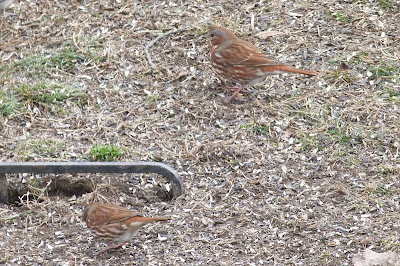 That is one small Fox Sparrow. Species can always be variable in size for reasons from geographic origin and subspecies to sex to purely individual differences but in this photo you can see the bird behind it appears much larger than the one closer to me. I think, apart from fatigue, this is what helped fool me at first.