Earlier this week a birder named Cindy sent some photos of a strange winter visitor to CAS Director of Communications and Community Outreach Tom Andersen. Tom shared with me the record shots of what was a Yellow-breasted Chat! Apparently it has been spending a large part of the winter in Cindy's private yard in New Haven County. She tells us that the bird has been frequently seen at her feeders and in and around a pine tree. The only problem for the bird is that New Haven County happened to be the epicenter of the Blizzard of 2013. Here are a few shots of it in the snow on February 9, the morning after the storm. 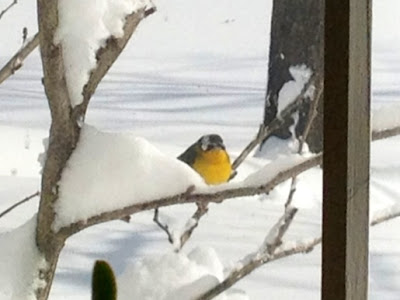 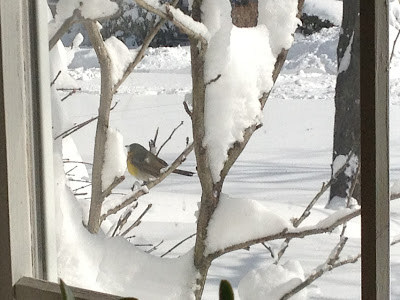 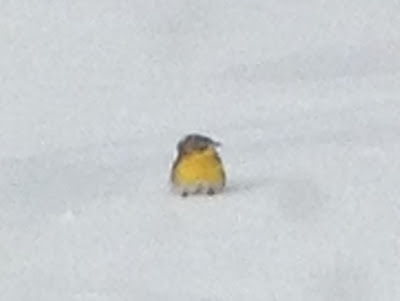 A Yellow-breasted Chat is certainly not expecting to deal with three feet of snow in one shot. It was lucky to already have decided to spend its time at a reliable feeding station or it would have probably perished very quickly that weekend. Yellow-breasted Chats are rare in Connecticut in the winter and summer and uncommon in migration in my experience. I can typically find a bird or two a year during some of the major passerine movements. They are listed as Endangered on the Connecticut Endangered Species Act. One of the problems with finding them is that they do not want to be found - they are skulkers who usually confine themselves to thick cover and dense bushes and shrubbery. I have had plenty of occasions to spot a bird once as it spotted me only to never see it again. Having one at your home must be special - thanks Cindy!