Right about the time when we start to hear the birds singing in Connecticut we also start to see the first passerine migrants on the move into the state with many more pushing up the southeast United States. It seems as if Northern Cardinals and House Finches are some of the earliest reported songsters each year. Mourning Doves and Song Sparrows are not far behind either. While Red-winged Blackbirds, Common Grackles, Brown-headed Cowbirds, and American Robins are year-round Connecticut residents, they mostly like to stay along the coast and are concentrated into large feeding flocks, making sightings of the species much less frequent than the rest of the year even if thousands are still in the state. Right about this time each season we are inundated with notices about early sightings of these birds and concern over their status, but they can handle late winter storms and inclement weather very well as more of them move back north. In fact I was happy to hear a male Red-winged Blackbird calling and looking for a mate on a warm day earlier this week.

While chatting about some of the early "spring" sightings with CAS Director of Conservation Services Anthony Zemba he mentioned that he had observed how rapidly the non-native House Sparrows and European Starlings were getting the breeding cycle underway. They seek out any nesting cavity they can find at this time of year, mostly in human construction of some sort. You will soon see them toting nesting material there. If you have not cleaned out your nest boxes yet it is a good time to do so soon, but you may want to wait a little longer just to be sure you can evict these invaders when you do. It can be a full-time job if you live in an urban or suburban area.

In southern states, many species have already begun their northbound migration. One of the earlier arrivals that we keep a close eye on is the Purple Martin. This member of the aerial insectivores that the CAS State of the Birds 2013 details is particularly important for conservation because it relies entirely upon human-created nesting habitat in the eastern United States in the form of gourds and boxes on poles in open areas, ideally near water. Connecticut Audubon Society helps to manage their populations across the state and has gourd trees in place in several locations. Personally we are hopeful of having additional successful nesting pairs at Stratford Point this year.

The Purple Martins have begun to move as well with early birds being reported throughout South Carolina this February. Take a look at the image below from an eBird map to see where they have been so far in 2013 with all of the orange pointers representing a sighting within the past 30 days. 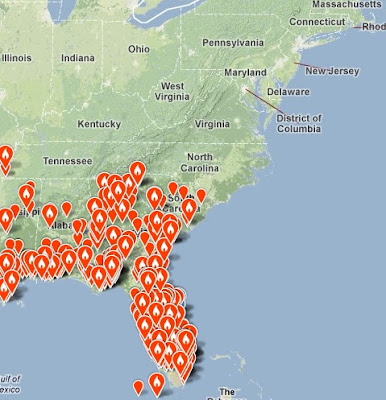 Most of the earliest-returning individuals will arrive in Connecticut in the first week or two of April depending upon weather conditions. They are extremely vulnerable to cold and wet conditions in the early season as it naturally reduces the availability of their prey and can be fatal. As of now it seems that March is going to begin a little cooler than usual with a lot of chances for precipitation. Maybe we will undergo the unfortunately increasingly frequent rapid warm-up without much of a spring season again as you will remember the middle of last March featured temperatures in the 70s and 80s. If that is the case then we can be ready for more record-setting first-of-year arrivals as passerines will be rocketed in our direction on strong southerly flows.