Least Flycatcher in the rain

During one of the migratory pushes at Stratford Point I had an uncommon Connecticut species that is typically found there once or twice a year - the Least Flycatcher. This bird was one of two that was trying to feed in the middle of constant and sometimes heavy showers. 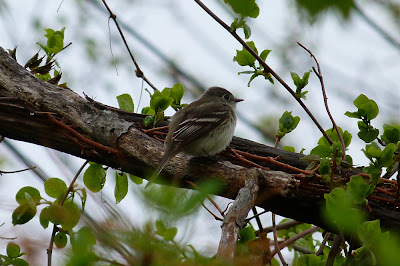 The shrub and scrub habitat along Prospect Drive in and around Stratford Point is perfect for them to settle in after a long flight. Depending on the situation we sometimes also find deep forest flycatchers like the Eastern Wood-Pewee present. When there is a lot of fog on Long Island Sound or rainy conditions it helps to ensure they stop at Stratford Point as it is one of the first pieces of land a bird will find if they cross the water. It is also one of the only undeveloped major sites containing upland habitat along the entire Connecticut coastline making it a vitally important stopover location for birds like these.