In the hot spring of 2012 we experienced a severe drought that had long-lasting effects throughout the summer. While we had normal or above normal precipitation not long after that blog entry, the damage was already done. The much warmer than usual temperatures quickly evaporated vernal pools after they had a fast March start. Small streams and creeks dried up rapidly eliminating a lot of odonates before they could even emerge. Large ponds and rivers were reduced in size as well, something that one cannot help but notice even now. 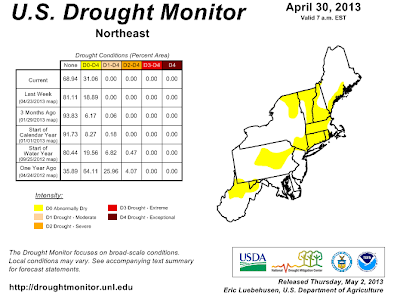 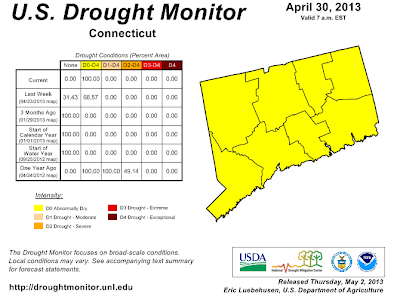 In a week or two those colors will be getting darker if we don't get a lot of rain. The difference this year as we enter May is that we had a typical sort of spring in terms of temperature. The problem is limited to the precipitation itself. After the Blizzard of 2013 a couple of subsequent snowfalls provided the only significant water the state has seen. Try to remember when we have had a prolonged soaking rainfall - good luck with that!

At Bridgeport's National Weather Service climate station we see the following precipitation amounts during the months in question:

And the same information for the Hartford area:

It was actually the third driest April in the Bridgeport area since records started there in 1948. These deficits in combination with a lot of bright and sunny days with seasonal temperatures mean that water is being evaporated quickly. Whatever runs into Long Island Sound is not being replenished. The lack of snowfall to our north also kept some of the larger rivers lower than usual and meant less water for Connecticut. We do not seem to have any significant rainfall locked in to our immediate future, but Wednesday and Thursday of this week could yield a half inch or more if we're lucky from a low moving our way as this blocking pattern finally erodes. Perhaps the beginning of severe weather season (May 1) will soon help us to generate some rainfall via beneficial thunderstorms at some point, but those are of course localized in nature. All life in Connecticut would appreciate a rainy day soon.