Migration is now entering prime time, and in Connecticut it seems like somewhere around April 20 through May 20 is the biggest month of movement we have. From Willet and Marsh Wren in the salt marshes to Eastern Towhee and House Wren in your yards, or Black-and-white Warbler and Warbling Vireo in more wooded areas, the new arrivals are piling up. We were thrilled to see a pair of Purple Martins arrive at our gourd tree at Stratford Point today and we hope these are the first of many. It seems likely that we will have at least one successful nest this year.

Millions of birds arrive each day to spend the summer in our state from the billions who will pass through. However, one diurnal migration event by a common species is only rarely noted in Connecticut yet happens frequently each spring at Stratford Point. Yep, it's the Blue Jay - no, really! Look at this photo of them flying over. 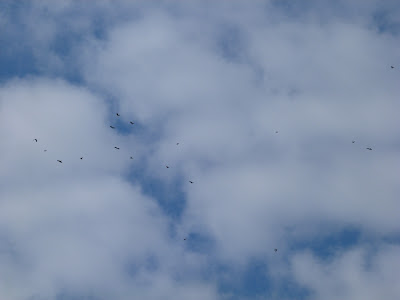 Most people do not think these birds move at all, as they are seen year-round in abundance. However, they often travel in very large groups quite far to the south, and while we may retain some birds all year, many may be replacements from the north for "our" birds that ventured south.

Blue Jays fly in to Stratford Point, and specifically the lighthouse and line of trees behind it, in groups of about 40-50. They keep to this numerical range with uncanny accuracy for whatever reason. They will often land in the few trees along the perimeter of the site to rest momentarily before continuing north. Other times they fly over Stratford Point, turning around a few times to reorient themselves, and keep moving on. More rarely the group will land and somewhat disperse to find a snack before presumably grouping up again together and heading out.

Here is another wider shot of one group from today with a few of the birds out of the frame. 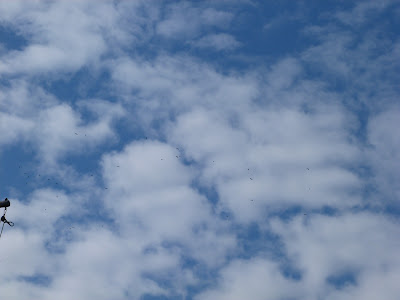 This sort of thing is expected at Lighthouse Point in New Haven, an infamous highway for all sorts of birds, but Stratford Point is gaining a reputation as a lesser version, as least in terms of non-raptors. As we continue our habitat restoration and add in more native woody vegetation, we should only increase the number of birds who want to use it as a rest stop or trail marker.