By now, you have probably seen your first Great Egret of the season, and possibly a Snowy Egret. Some have reported Yellow-crowned Night-Herons that returned to Connecticut in the last couple of weeks. This year was an early year for some of these birds as well, able to move up the coast and back here without the threat of wintry weather. Great Egret in particular were notable because they filtered in during the March warmth across the state. Some of them also found their way through the winter in New England, being seen in every month in places like the marshes of Stratford Great Meadows. 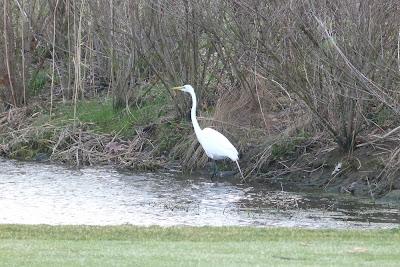 The above bird was actually in Westport in a place you might not expect - the Shorehaven Golf Club. 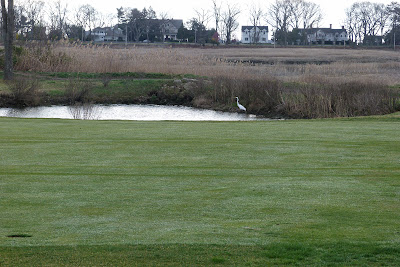 We have been working with them to develop a management plan for the property which so happens to contain a sizable area of tidal marsh. These are exactly the sort of lands we hope to work on more in the future that may be out of the public's ownership but held by environmental conscious and progressively-minded individuals and groups who want to find the balance between our lifestyles and still maintaining natural habitats and everything in them. Having a priority habitat as a major feature of the property makes it all the better. We will be conducting surveys throughout the spring, summer, and fall to find all of the birds, mammals, insects, plants, amphibians, reptiles and more that Shorehaven contains.