On the morning of April 15, I led a bird walk at the Shorehaven Golf Club for about 25 members. As I had mentioned in this post, we are working to development a management plan for the property for the conservation-minded club that does have some very valuable habitat. It is also located in a geographically important area, both in being on Long Island Sound and in the southwest corner of the state, near migration corridors for a wide-ranging selection of species. We were actually able to see 39 species while golfers teed off around us.

An Osprey platform in the tidal marsh on the site looked like it had the female on at least one egg. Several Great Egrets flew back and forth as they fed while Tree, Northern Rough-winged, and Barn Swallows kept to the skies over our heads. We had a great chance to listen to the trill of multiple Chipping Sparrows against that of Pine Warblers and understand how to differentiate between them. I even heard a Louisiana Waterthrush on a neighboring wooded property, an odd sound for the area but not entirely unexpected on a day of heavy migration.

This migration was most evident in the sparrows as dozens of Song, Swamp, Savannah, and Chipping had flooded Connecticut and every pocket of the property. Below is a Savannah Sparrow, a state-listed species that obviously utilizes much of this habitat in migration, which cooperated for us, providing great looks while even singing and calling a little. 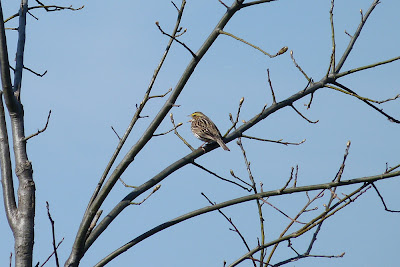 This Swamp Sparrow was one of many mixed in with the cattails between a couple holes. 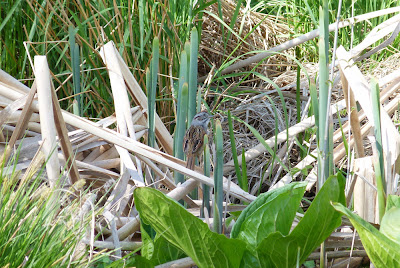 Overall it was an impressive day again at an unlikely (but actually likely!) location.