Purple Martins back for 2012 season

Purple Martins used to be known for returning in mid-April, but now their arrival seems more tied into the Major League Baseball schedule as they came back to Connecticut in the first week of the month. Gazebo Phil spotted some at the gourd trees on Long Island Sound a few days ago, and trust me, if you have not followed a season of Purple Martins with him live 24/7, you need to: http://gazebophil.com/

You will be witness to everything from housing selection to pairing up of the birds, nest building and egg laying, and of course raising the young right before your eyes. It is highly addictive and I warn you in advance that this is not for those with little free time on their hands.

You may also recall that 185 chicks were banded from these gourd trees at Gazebo Phil's last year, and we anticipate seeing hopefully some young that were banded back here to make a home of their own. 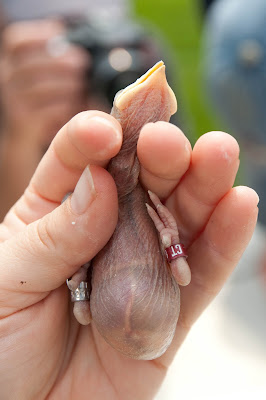 Other birds from other colonies in the state also banded by the Connecticut Department of Energy and Environmental Protection may make an appearance. They will feature colors other than the red bands placed on Gazebo Phil's birds. Please let us know if you see any of these birds with various color bands and a silver federal band anywhere in the state. This banding process will be completed once again this year in a few months by the CT DEEP and Connecticut Audubon Society.


All photos © Twan Leenders and not to be reproduced without explicit permission
Posted by Scott Kruitbosch at 2:01 PM