In the past month we have discussed the lack of precipitation as of late in terms of vernal pools drying up and the related wildfire threat that exists in places such as Stratford Point where a controlled burn took place in late February. In the past week or two the fire threat has steadily increased as warm days with very low levels of humidity and gusty winds have become common. This, combined with a lot of dry fuel on the ground, makes for fire weather, and some days the region has been under a red flag warning. This hazard level is set when conditions are ideal for fire ignition and propagation and is used as a tool to warn citizens, fire departments, as well as land owners and agencies.

Such a brush fire started Monday in Milford and was visible from Stratford Point that evening. 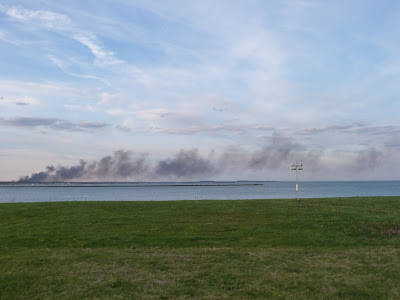 You could even see it picked up by weather radar extremely well. 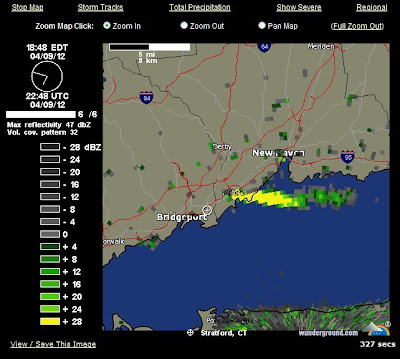 While this situation was brought under control with only a modest disruption of life, what happens when we have a larger fire, or one that cannot be contained as easily? A few hundred years ago weather like this would have meant any areas full of fuel would stand a good chance of burning if lightning were to strike, a relatively common occurrence in the Connecticut of past. This was natural conservation that would regenerate the land in fits and starts over generations.

With our modern firefighting abilities we do not allow such fires to burn, and the land is largely fragmented in our state to begin with. Obviously human safety and the protection of personal property is paramount, and no one would suggest letting wildfires burn in such a populated area. However, we need more controlled burns to be utilized as a conservation and management technique across the state in the coming decades if we wish to help ensure the quality of our environment all while safeguarding ourselves even further. It will reduce the risk of such events and even help stop the spread of some non-native and invasive plants. I know I would not want a fire of that magnitude suddenly occurring in my neighborhood.