I would like to thank everyone who joined us for the Connecticut Ornithological Association raptor workshop this past Saturday, September 15 at Boothe Memorial Park in Stratford. We had a great crowd of over 30 people that grew to over 40 and totaled over 50 during the course of the morning and afternoon. The conditions for raptor migration were decent - not bad but not great. A weak and dissipating cold front went through in the early morning hours and lingered to the east. The pressure gradient was tight and high pressure was still moving in towards the Great Lakes. The volatile atmosphere was still clearing out post-frontal clouds after a tiny sprinkle during its passing, and the clouds lingered until 9AM.

The gusty and variable flow was not uniform aloft, all coming out of the northwest, until later in the day. Immediately after a cold front, the air is often coming from the north or northwest at the surface but still southwest as you climb into the atmosphere. Ideally, we would have had the front go through 12 hours earlier and all of this may have been perfect for a big flight. Nevertheless, we still had many nice views of a good variety of birds as the temperature rose into the 70s with the wonderfully dry and pleasant air making it a lovely day to be outside. Here is a bunch of people tuned in to the action down over the Housatonic River. 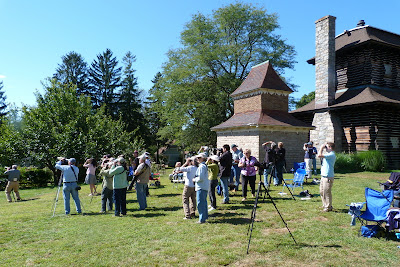 That does not include the numbers of local birds like Black Vulture, Osprey, Turkey Vulture, Red-tailed Hawk, and Red-shouldered Hawk that were not heading south and instead often provided perfect sights for the crowd to study and discuss in terms of identification. Once again, that total is decent, but we have had many better days and many worse ones, too.

So far at Boothe Park in 2012 we have had 4,596 migrant raptors in 53.25 hours, and this does not include today as birds are heading south while I type this. I'll discuss some of the bigger flights sometime soon as we are already wrapping up Broad-winged Hawk season. Time flies as fast as they do.