I joined Charlie Barnard, expert birder and naturalist, and Larry Fischer, a licensed bird bander and raptor virtuoso, at the orchard section of the Aspetuck Land Trust's Trout Brook Valley Conservation Area this past Saturday, September 22, for a hawk walk. Around 25 people came to Trout Brook Valley for a presentation by Larry followed by our walk through the orchard. If you are unfamiliar with the area, the orchard and a connected farm and grasslands habitat is one of the largest blocks of open habitat in the state and even region, bringing in specific birds that fit the land such as Field and Savannah Sparrows, Indigo Bunting, Eastern Meadowlark, American Pipit, Bobolink, Eastern Bluebird, and many more in every season. The area also pulls in many raptors of open habitats and forest edges as they migrate during the fall, sometimes holding dozens and dozens of birds.

Larry planned to attempt to capture a couple of raptors to band and show the group close up before releasing them back into the orchard. He was extremely successful, with his first catch being this young male Cooper's Hawk. 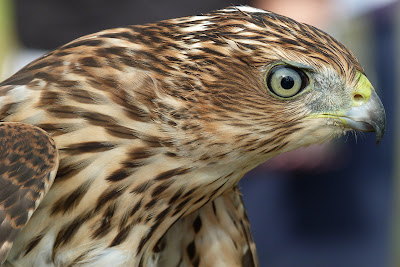 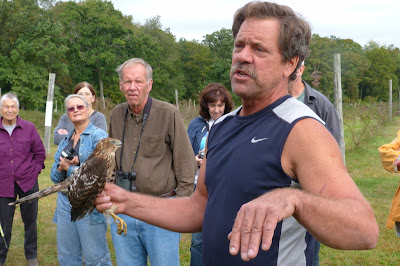 The "Coop" seemed to be a rather thin individual, and Larry mentioned that its weight was about 330 grams when it should be more around 350 grams. He discussed the species and accipiters in general, noting how they are built to move through the trees of the forest, around quick corners and through heavy brush to capture prey. 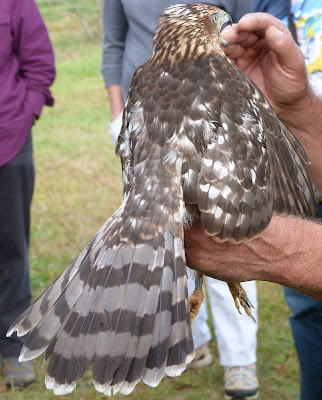 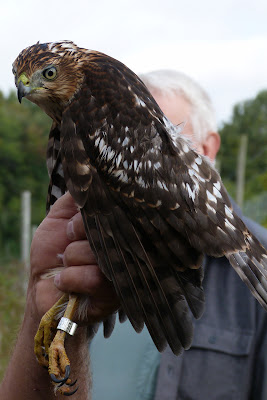 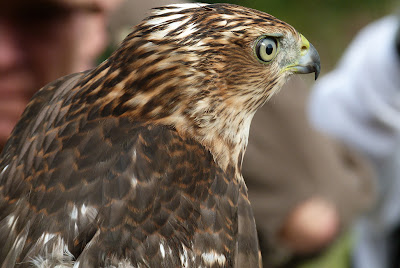 We quickly let him go back to find a meal that he sorely needed, and about an hour later during our hike we saw him again down by the farm fields, hunting happily. We knew Larry had another species for us, but he did not mention that he had two wonderful captures of an emblematic grassland bird - a male and female American Kestrel. 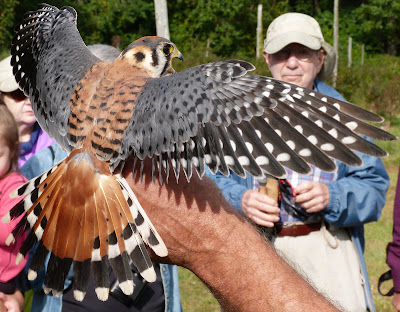 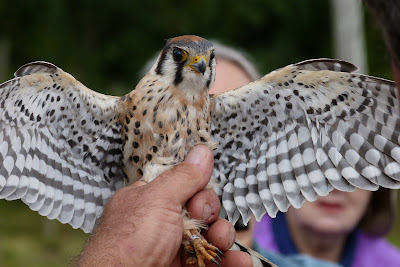 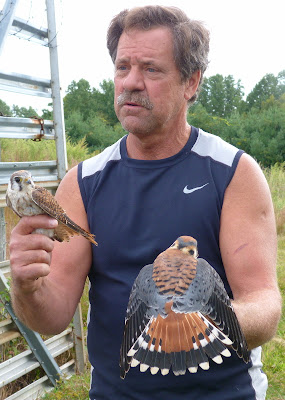 Charlie told us that he has seen days where 30 or even 50 of the species have been positioned throughout the huge open space in the peak of migration, and while there were not that many, we saw at the very least eight individuals present that day. We were even able to watch more flying and hunting while Larry held these two for us to examine and discuss. 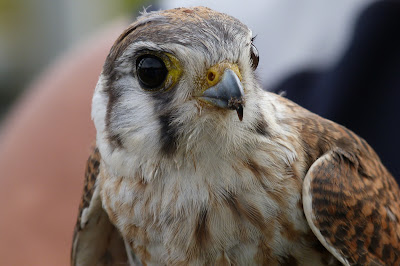 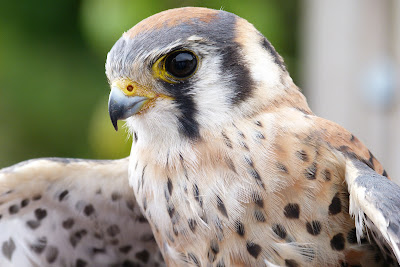 He talked about their decline, likely linked to losing much of their habitat in both breeding and migration season. Larry discussed the plumage features and how unlike most every raptor these birds are sexually dimorphic, differing in appearance by their gender. The female was calm enough that those present could feel her feathers. 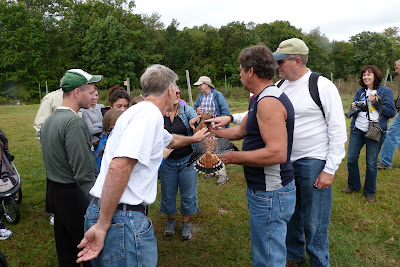 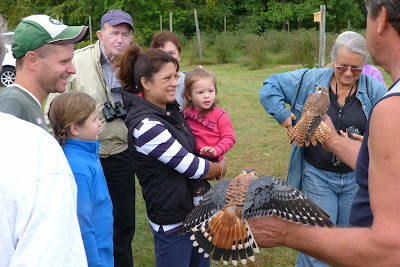 After we released them, they went immediately back to hunting on the posts lining the fence of the orchard. It turns out Larry had one more bird, a surprise that he does not capture more than once or twice a season and one that really excited even jaded old me - a Merlin! 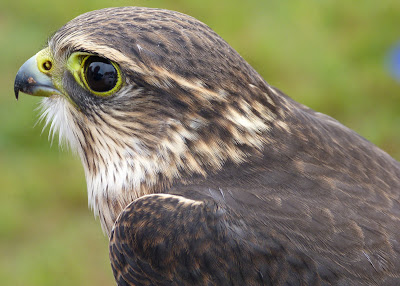 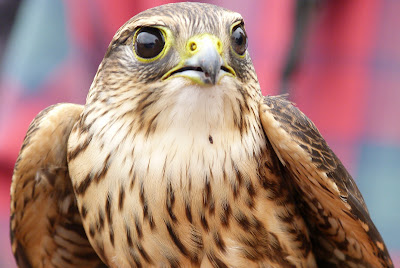 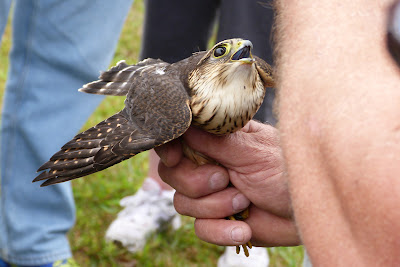 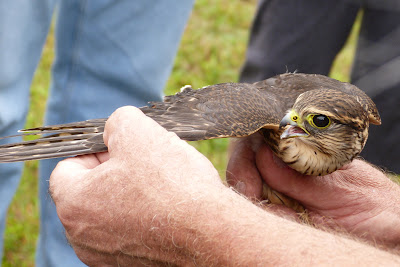 I have seen American Kestrels up close and personal on numerous occasions, from injured birds to young at a nest box to other banding operations, and I see them frequently enough at Stratford Point. Cooper's Hawks can give you great views from your window while strafing a feeder or feasting on a passerine. However, while I see Merlins from time to time on the coast, I cannot recall having seen one in hand, and it was fascinating to see the species up close. This male was especially small to me. He was also very calm as Larry discussed this lesser known raptor. 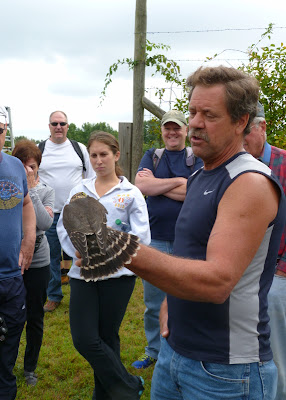 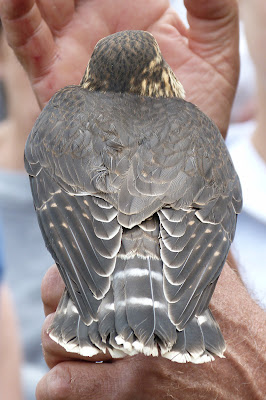 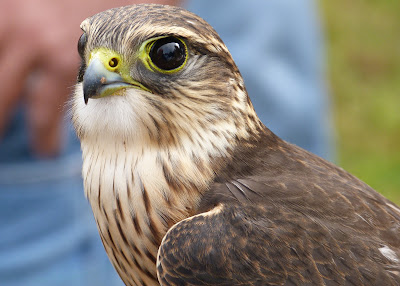 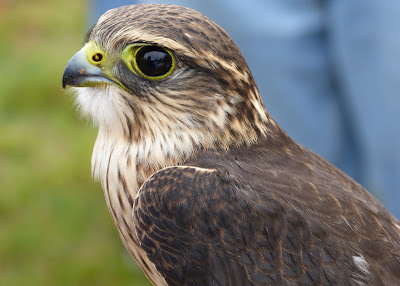 Merlins are actually expanding in their breeding range and are now known to nest in Massachusetts. Twan Leenders, past CAS Conservation Biologist and now President of the Roger Tory Peterson Institute in Jamestown, New York, told me a few weeks ago that he found a couple recently fledged Merlin and their nest as there are now two known sites in the nearby area. It is only a matter of time before they are found nesting in Connecticut.

After such a successful and wondrous presentation by Larry, a bunch of very entertained and informed people set out to loop around the entire orchard. Kestrels zipped by, Eastern Phoebes and Eastern Bluebirds popped in and out of trees catching insects, Blue Jays trickled through migrating to the southwest, and Palm Warblers bobbed their tails while picking through the grasses. Here's a full list of the sightings for the morning:

Thank you to everyone who joined us and thanks to Larry and Charlie for a tremendous time! We hope to see you at an another hawk walk on Saturday, October 13, at 9:30AM. More information and directions can be found here on the Aspetuck Land Trust website. I hope that there will be many raptors for Larry to try to catch and plenty of sparrows and late season warblers roaming the fields.