On Sunday morning, a little more than 24 hours after the passage of a cold front and a subsequent strong day of raptor movement in the northeast, I found a great group of birds at Stratford Point. Normally at this time of year, our visitors find the little ones the most noteworthy, but in this case, it was the predators, not the prey, that captured my attention. There were nine (9!) American Kestrels present along with one Merlin. 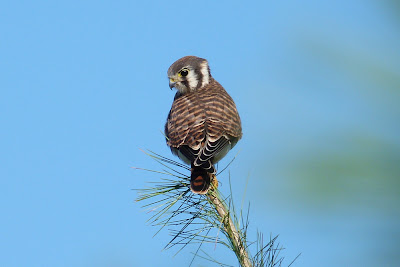 Three kestrels were kiting - hovering to hunt while facing the wind so that the breeze helps to keep them aloft - when I arrived. There were four more in four trees along the edge of the grasslands, one on a building, and one on a telephone pole. 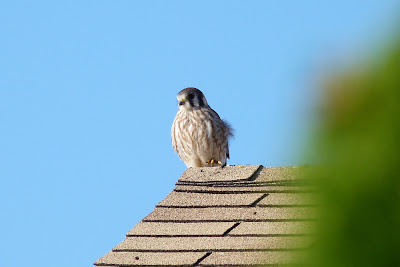 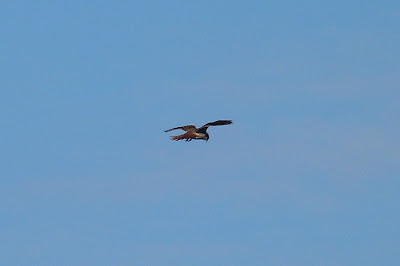 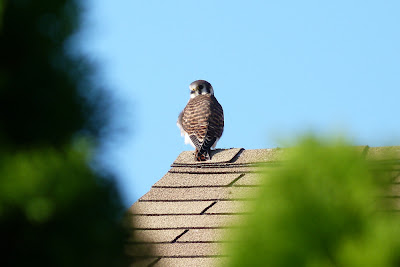 The Merlin was in the trees by the gate, feeling outnumbered, and taking some passes at the birds there. Suffice it to say the little ones were very quiet, hiding along the edges of the property, with many Savannah Sparrows tucked in our constructed dune.

Stratford Point's coastal grasslands and the management practices that we have applied to the site over the past several years clearly help species like the rapidly decreasing American Kestrel by providing very desirable stopover habitat. These birds can rest in safety while refueling before continuing their journey south at this oasis in the midst of considerable development on the Connecticut coast.

Our friend Tom Sayers has been doing great work for American Kestrels, constructing and maintaining nest boxes across the state, including one at Stratford Point. We have yet to have a pair nest there but we are hopeful. He color-banded 123 kestrels in his study area this season and would love anyone and everyone to try to spot any of these birds on their way south. Since he is the only one color-banding kestrels in New England, even the detection of any color would be a strong indicator of one of his birds. It would be tough to scope one at a hawk watch, but I am trying my best, and everyone should examine any birds at stopover sites like Stratford Point.

In my next post, I'll discuss some of the amazing raptor migration that we have enjoyed at Boothe Memorial Park in Stratford so far this year. It has been a stupendous season and, as always, a tremendous task for conservation, education, and advocacy all in one.