Nearly a year before this blog was even set up in April 2010, I was working with Twan Leenders on waterfowl surveys at Stratford Point and conducting breeding bird surveys in the Stratford Great Meadows Important Bird Area in the summer of 2009. This was also over a year before the White-tailed Kite's visit, and very few people even knew where Stratford Point was, let alone that any member of the public could access it when Connecticut Audubon Society staff was in the office. We often found some very cool birds there as we do now, and I am sure had it been a completely open site for the last decade the incredible list of rarities and conservation priority species it has hosted would be even more extensive, in line with some of the best spots in the state.

While taking a break from his desk on one very hot July day, Twan found a very strange bird hopping around near the beach and the grasslands. He was able to snap off several record shots of it in the hazy conditions before losing it in the grasses. 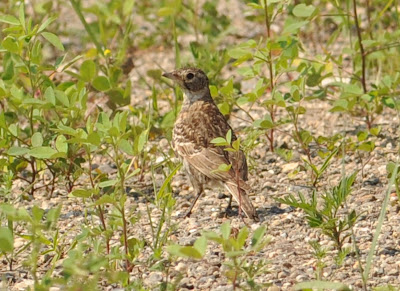 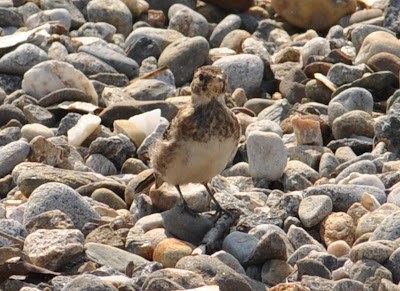 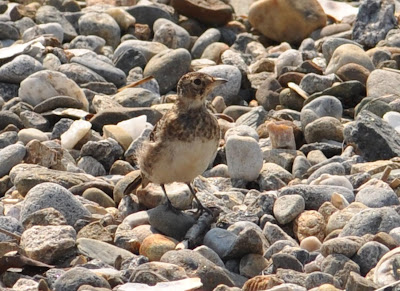 After a little thought and a look at a book, he came up with the answer - that this was a recently fledged Horned Lark. It almost certainly came from a nearby nest, though we were never able to figure out where (Sikorsky airport, Milford Point, Short Beach, etc.) and we never saw it or the bird's parents again. It was probably not from directly on Stratford Point itself, as we thought we would have seen the birds at some point with how much time we spent there. Still, this is a state-endangered species, and one that is only very rarely seen at this time of year.

That is why it was awesome to see a juvenile Horned Lark at Rocky Hill Meadows earlier in the week that initially fooled many people into thinking it was a Sprague's Pipit. Look at it for yourself here on the Audubon Alliance for Coastal Waterbirds blog. While those birders may have been disappointed at not being able to see a lifer, we were happy to be able to record a superb individual of one of our target species as they can certainly be coastal-nesting birds apart from those inland grasslands. Let's hope in the future that shoreline conservation and restoration will encourage a few more pairs to breed across the state.


Photos © Twan Leenders and not to be reproduced without explicit permission
Posted by Scott Kruitbosch at 11:39 AM