Flycatchers clearing out with rarities to come

Yesterday's cold front brought tornadoes, heavy rain, and a heck of a lot of bird movement. This includes the Caracara (!) reported from New Jersey as well as the yet to be discovered rarities that are very likely lurking here after a tremendous rush of southerly and tropical air followed by the rapid shift to a northwesterly flow. Today will be a very good day for raptors, and Monday and Tuesday could be productive as well. It is also getting to be time to say goodbye to some of our littler friends until next spring, and while they were not able to move much last night with rain continuing after the front in our state, they should push through by the millions tonight and tomorrow night.

By the end of the month Eastern Kingbirds like this one will have departed Connecticut along with nearly all of the rest of the flycatchers with the exception of the Eastern Phoebe. 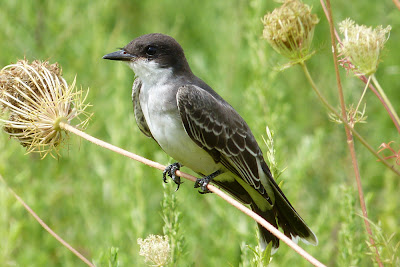 Kingbirds are on the move during the daylight hours, and while their numbers are dwindling I would have to guess that today will feature a nice push of them, Chimney Swifts, Ruby-throated Hummingbirds, Blue-gray Gnatcatchers, and various swallows on the way to the south. Labor Day may have been last weekend, but this one sure feels like the end of summer and beginning of fall.