In what is becoming a yearly tradition, another rare Clay-colored Sparrow was seen at Stratford Point yesterday. Frank Mantlik found and photographed the bird which you can see below, thanks Frank! 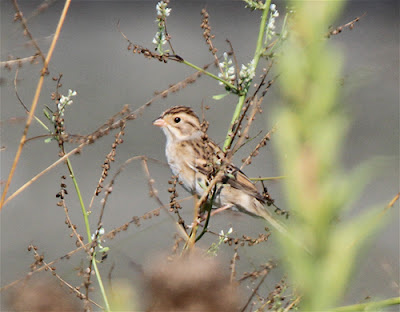 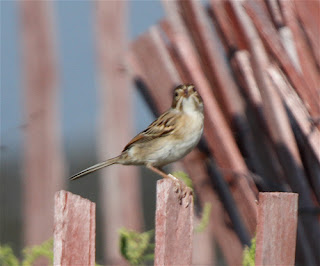 It seems to have been hanging out mostly near our recently constructed dune as you can see it perched on some of the snow fencing surrounding it. We have had them mostly in fall migration, but some have been seen in the spring and one even tried to overwinter a few years ago. A coastal grasslands in the middle of so much human development that sticks out into the waters of Long Island Sound is going to attract thousands of birds every fall. Even a vagrant like this helps to illustrate why Connecticut Audubon Society and Sacred Heart University have put in so much effort to restoring the property and adding key habitat features to aid these birds on their journey. While those trees and shrubs still have to grow and mature, they will be a wonderful place to see migrants at this time of year for many seasons to come.

Avian mortality is several times higher, if not more, during migration, and it is always invigorating to know that the birds we see at protected properties like this one stand a much better chance at making it to their destination as they are able to refuel and rest in relative peace and safety.


Photos © Frank Mantlik and not to be reproduced without explicit permission
Posted by Scott Kruitbosch at 12:04 PM