Last season a Red-tailed Hawk, the would-be chicken coop raider, was the 2011 Boothe Park hawk watch mascot. Three Black Vultures seem to have taken the 2012 title. On any given day, we typically see the three of them "hanging out", flying around the area all day long, sometimes with several more of the species. However, our trio is particularly fond of the regulars and many visitors, and recently posed on the chimney of the "basket house" on the west side of our site. 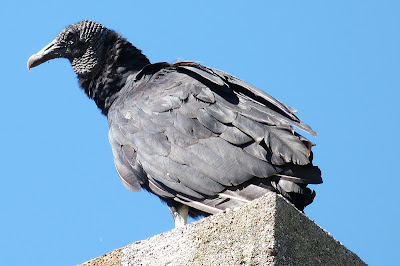 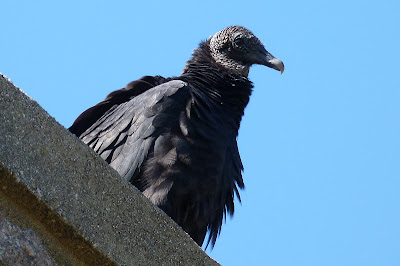 Black Vultures are becoming more and more common in Connecticut by the year and throughout the season, with a handful of birds clearly migrating south past our point each year. They are now found breeding and in the dead of winter. Even a few years ago, it would be a little difficult to add them to your Big January list, but I do not anticipate any problems doing that in 2013.

Oh, wondering about the chickens, are you? They're doing very well and have not been targeted by any raptors in our time there this year. However, the same cannot be said for the dozens of House Sparrows that hang out with them, or the Monk Parakeets sitting at the top of spruce trees, their bright green colors shining like a beacon for hungry raptors passing by. Good luck to them.