Have you been able to come up with the right species in the latest photo quiz, "name this bird"? It is one you could find in Connecticut in the fall, winter, and early spring. It may look brown in the photo, but it has a difference appearance come breeding season. It likes to pick at weeds and grass for seeds along driveways and areas of gravels at times like is shown in the photo, though it is very comfortable in the middle of a field, farm, dirt patch, or beach. 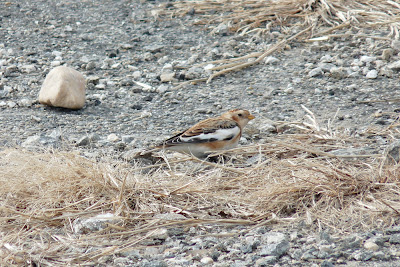 ...a Snow Bunting! They can be tough to find outside of a very open space, but two good places to see them in Connecticut are our Coastal Center at Milford Point and Stratford Point. They have been especially common at the latter feeding on grass seeds that were replanted in some areas after repair work was completed on the seawall after Irene. If you walk the perimeter of the site, especially near the path to the Long Island Sound side, you may see them quietly feeding on the ground, anywhere from a couple to several dozen. I saw three right there this past Saturday.