We all have some sort of nemesis bird or birds, whether it is a species you have yet to add to your life list or one that you have not seen in a long time and "should" have at some point. After literally hundreds of hours spent hawk watching at Boothe Park in Stratford, besides thousands of other hours of survey work, I had not seen any Snow Geese, not one Goose, since a group of around 75 flew over our heads at Boothe on November 2, 2008. Thankfully, while I was inside at Stratford Point Wednesday afternoon, our friend Frank Mantlik was outside scoping Long Island Sound and called me out of the office when he found a large group of around 115 Snow Geese coming off the Sound.

They were heading north through the low level clouds of the system that was still clearing to our east. They were probably lost in the rain and rapidly moving cloud deck, finding themselves over water and now resetting their course. They came directly over Stratford Point heading north, then east, then west, and then north again. Getting back on track wasn't easy for that lead bird, but I am sure they found their way eventually. I did not have my camera when they came directly over (naturally, this often helps you find birds!) but I grabbed it out of my car as they moved away, snapping a few photos of them bending this way and that way through the sky. 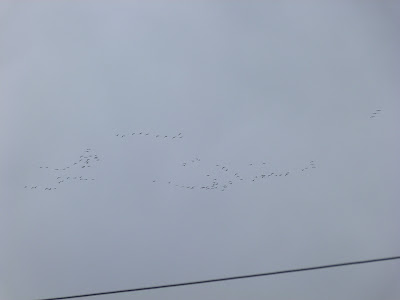 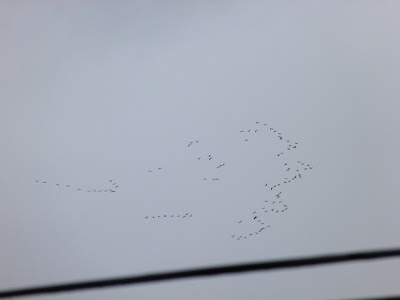 Take a look at the shot below that I left a little larger so that you can see the details of some of the geese a bit better. While I was unable to pick out a Ross's Goose from the lines, I did pick out what looks like a juvenile blue morph Snow Goose, highlighted in the red box. 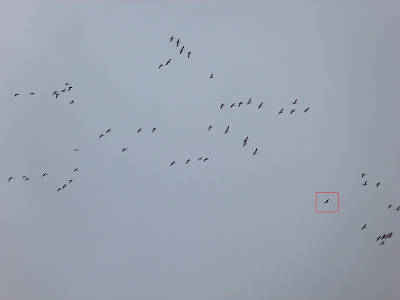 Apart from ticking off the species for the first time in three years, I was so glad to have them at Stratford Point. The only other time we had the species there was also the third week of November. I guess it is time for me to find another nemesis bird...
Scott Kruitbosch
Conservation Technician
Posted by Scott Kruitbosch at 11:51 AM