Let me preface this by saying this summary is being written very quickly to get all of the details out of my mind as fast as possible. It includes some of what I wrote down shortly after the sighting.

Today was yet another exciting day at the Boothe Park Hawk Watch in Stratford as friend and expert raptor counter Bill Banks and I spent some time counting a few hawks behind a cold front. There was not much movement as an upper trough came over, bringing virga and eventually light showers with it, and the few raptors going by under nearly completely overcast skies were all low. We had a decent variety with Sharp-shinned and Cooper's Hawks, several Turkey Vultures, a Peregrine Falcon, a Merlin, and a late Osprey moving directly south staying over the Housatonic River. That was a smart move for that bird, and we thought it was the highlight of the day.

However, at about 11:25 a.m., Bill spotted a dark bird heading right for us over the trees to the northeast, coming from the direction of the river. It took me several seconds to get on the bird as I looked through the gap between the blacksmith shop and the small storage building to its immediate east with him. Once I saw the raptor, I had initially no clue what I was looking at. It was not a falcon, vulture, or an accipiter, that was easy to see. It was definitely a buteo. It was small, in relative terms and as opposed to many Red-tails and Red-shoulders you see passing by right now, but had broad and stocky wings, short for a buteo. As it came over and by us, I picked out more identification points that we called out to one another during and after. 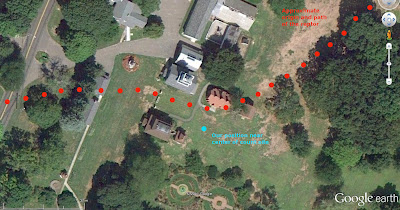 General flight path so you can see our position and the views/angles we had. Map is set at due north.

Looking at the undersides, breast, head...they all appeared completely dark brown, with only minor variations in intensity, almost a chocolate sort of color. Then I noticed the tail, and even from underneath, I could see distinct contrasting white and black thick bands. They were not differently sized - all the same - not like those of a Red-shouldered Hawk, for example, with multiple thin white bands. A second or two after I noted this the bird flared up at 80 or 100 European Starlings that dove at it, bringing the upper part of the tail, back, and wings into view, showing off those classic and unmistakable bands of an adult Broad-winged Hawk. The rest of the upper parts appeared exactly as depicted in Sibley's Guide to Birds on page 118. It is a perfect example of our hawk with one exception - the under wing did not appear to have that bright white as depicted for an adult dark morph Broad-winged Hawk. Otherwise, that is precisely what we saw.

Several seconds later, it was gone as it went over the trees to our west and continued on its journey. As it angled away, I thought there may have been a slight appearance of darker edges to the left wing, which was more exposed to us with the angle it was flying at, as it moved more parallel to us with the sun (behind clouds, as mentioned before). This was not much, darker against dark, and not nearly as obvious as the other marks.

It was surreal. Bill and I have both seen literally thousands of Broad-wings in the last two months during hawk watches at Boothe and Lighthouse Point, and simply, that is what that was to me. In my eyes, the only problem remaining was that lack of contrast of white or at least lighter color on the under wing against the dark brown. Lighting could have been an issue here, and this bird may not have had the bright white that is illustrated in some the field guides. What about other semi-rare or rare buteos? Swainson's Hawk and Rough-legged Hawk are both too large in size and wings and have the wrong shape. Having seen both morphs of Rough-legged Hawks on countless occasions living and working where I do in Stratford - this was not one. Moreover, definitively, neither of those species has the perfectly banded tail of a Broad.

Yes, it is November 17, but even eBird has records of Broad-winged Hawks going through the third week of November, let alone other sightings that have not been entered, such as three in the last 12 years on Christmas Bird Counts in Connecticut. On October 6 at Boothe, we counted 106 Broad-winged Hawks, and if that is not enough, we even added six more birds on October 28, just 20 days ago. I think that information is already more than enough evidence that we could easily have one Broad-winged Hawk go by the count site right now.

I know, that is easy to say and all good and well for a typical Broad-winged Hawk, but not a dark morph bird from way out west that should have been in Mexico two months ago. All I can say to that is look at the continuing theme of western rarities that have shown up in another fall full of incredible weather events and frequent west or southwest flow patterns. I do not feel it is inconceivable for one bird to have been brought up this way, like so many other species, only to be turned around and headed back south after the winds finally turned northwest today behind the cold front. Of note, this was the only buteo of any species we saw in 2.5 hours there today. There was not even a local Red-tail in the sky in these somewhat uncooperative flight conditions. I could even argue it was flying despite the conditions because it was so very late or far off course. It was not catching a thermal as it soared through 25 feet above the ground.

We went through all of the buteos and even the most improbable rare birds from the far south and Central America do not fit nearly as well as a regular adult but dark Broad-winged Hawk does. With all of that said, we welcome additional input. Bill and I feel relatively confident in what we saw, albeit unlikely, with that one noted problem in mind.